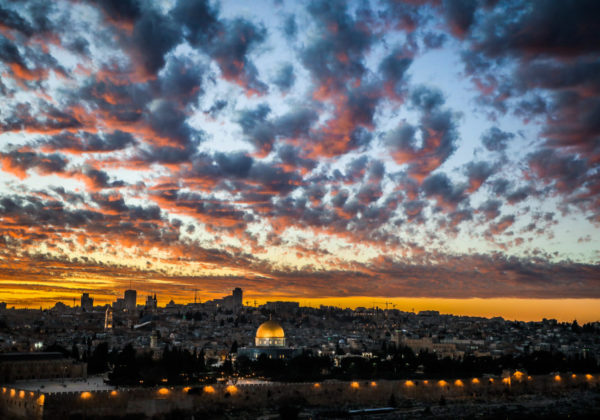 The Dome of the Rock mosque is seen during the sunset at the al-Aqsa mosque compound. (photo credit: SAEED QAQ/NURPHOTO VIA AFP)
Share:

Israeli police say the worshippers were trying to break into a closed area called the Gate of Mercy, or Golden Gate.

“In Jerusalem on the Temple Mount, five people were arrested for attempting to enter a closed area based on a court order,” said Israel Police spokesman Mickey Rosenfeld.

The Temple Mount remained open and operated normally after the disturbance was subdued.

The Gate of Mercy housed the offices of the Islamic Heritage Committee but was closed by the Jerusalem Police in 2003 after authorities discovered that the committee was engaging in political activities there. A court ordered the site be closed until further notice.

Monday’s incident is the second time in days that people have tried to break into the site.

Last Thursday, the Muslim Waqf religious council that controls the Temple Mount broke into the site and held prayers there.

A spokesman for the Jordanian Foreign Ministry told The Jerusalem Post that his ministry was “following up on this dangerous development through various channels to secure the reopening of the gate and the restoration of calm” to the holy site.