$100 million in aid pledged to Venezuela. Concert to pressure Maduro to let in aid 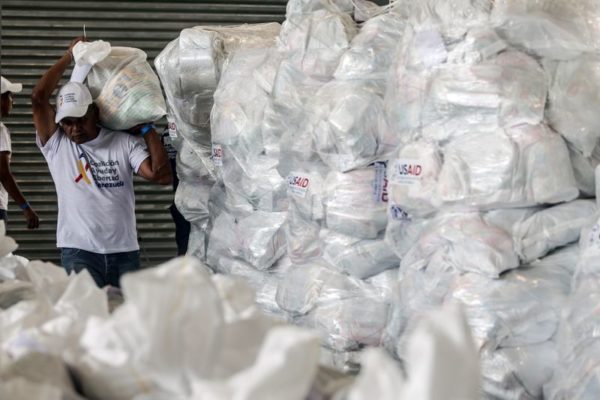 Twenty-five countries have pledged $100 million in aid to Venezuela and the Virgin Atlantic founder  is planning a concert on the Venezuelan border in a bid to pressure the government of President Nicolas Maduro to let in humanitarian aid supplies.

Caracas- Twenty-five countries have pledged $100 million in aid to Venezuela, a top US official said Thursday, as the crisis-hit country’s Supreme Court took aim at oil executives appointed by the opposition.

Venezuela is plagued by hyperinflation and major shortages of basic goods, and two men — opposition leader Juan Guaido and President Nicolas Maduro — are vying for control of the country.

The United States is among more than 50 countries that have recognized Guaido as interim president, but Maduro — backed by the country’s military as well as Russia, China and dozens of other states — has so far refused to relinquish his office.

US national security advisor John Bolton made the announcement on the aid pledged to Venezuela following an Organization of American States conference on assisting the country.

According to David Smolanksy, coordinator of an OAS working group on migration and refugees from Venezuela, the money will go directly to aid collection centers set up on the borders with Colombia and Brazil and on the Caribbean island of Curazao.

At the opening of the conference in Washington, Guaido’s representative in the United States, Carlos Vecchio, said the priority is to get aid into Venezuela on February 23 — a month after Guaido declared himself Venezuela’s interim president.

– Blockade at the border –

Guaido and Maduro have been locked in a battle over allowing aid into the country, and the military reinforced a blockade on Thursday at the border with Colombia, where the opposition leader has vowed to bring in desperately-needed goods.

AFP journalists saw several new freight containers blocking the road that connects the town of Urena in Venezuela to Cucuta in Colombia, where tons of US aid has been piling up for a week.

Venezuela is enduring the biggest economic crisis in its modern history, with hyperinflation predicted to hit 10 million percent this year according to the International Monetary Fund.

On Wednesday, the opposition-controlled National Assembly — which is headed by Guaido — appointed executives to form new boards for Venezuelan state oil firm PDVSA and its US-based affiliate Citgo.

The high court — which is packed with Maduro loyalists — ruled that the executives were named by a legislature whose decisions are “null,” and that the appointees should face prosecution for crimes including “usurpation,” “corruption,” “organized crime” and “terrorism.”

The Supreme Court decision set in motion the process of extraditing the accused, most of whom are in the United States, and freezing their accounts.

Guaido celebrated the appointments as a “step forward in the reconstruction of PDVSA,” but Maduro had warned that those accepting “illegal” appointments would face justice.

The United States, which is leading the push to topple Maduro, has sanctioned key regime financial assets including the Citgo subsidiary, and President Donald Trump has refused to rule out military action against the leftist leader.

Concert at the border to raise another 100 $million

Virgin Atlantic founder Sir Richard Branson is planning a concert on the Venezuelan border in a bid to pressure the government of President Nicolas Maduro to let in humanitarian aid supplies.

The billionaire said in a video clip on venezuelaaidlive.com that he’s organizing “a wonderful line-up of international and regional artists” in the Colombian border city of Cucuta on Feb. 22, in response to a request by opposition leaders Juan Guaido and Leopoldo Lopez. Guaido is recognized as president by more than than 30 countries, while his mentor Lopez is under house arrest in Caracas.

“We must break this impasse, or soon many Venezuelans will be on the verge of starvation or death,” Branson said. “Our goal is to raise $100 million in 60 days and re-open Venezuela’s borders to that humanitarian aid can finally reach those millions who need it the most.”

Colombian singer-songwriters Juanes and Carlos Vives, Venezuelan reggaeton star Nacho are among the performers invited to attend, according to the event’s website. Luis Fonsi, who is known for his hit “Despacito” and Brazilian pop singer Anitta are also on the list.

More than two million Venezuelans have fled the nation’s economic collapse over the past two years, the largest migration in modern Latin American history, with Cucuta the first port of call for many. Many leave Cucuta on foot to trek south in the hope of reaching Ecuador, Peru and Chile.

The U.S. is stockpiling food and medical supplies in Cucuta, in a bid to put pressure on Maduro’s government and alleviate shortages. Maduro has ordered his security forces not to let the supplies through, saying they are part of a scheme cooked up by the government of Donald Trump to provide a pretext for intervention.