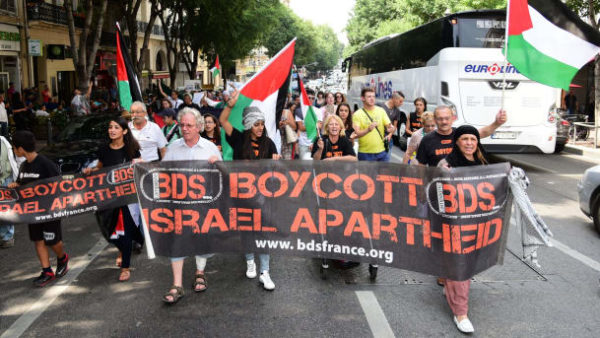 But that hasn’t stopped filmmakers from dropping out of his Tel Aviv International LGBT Film Festival to protest the country’s policies toward Palestinians.

“We are a very human-rights-oriented film festival. Here in Israel, they think we’re left-wing queer weirdos,” Sima, its executive director, said. “But outside, it’s the same: ‘You’re from Israel, you’re right-wing, you’re an occupier.’”

Like many other entertainment and cultural events here, the film festival has been targeted by the Boycott, Divestment, and Sanctions campaign.

Founded in 2005, BDS calls for “recognizing the fundamental rights of the Arab-Palestinian citizens of Israel to full equality.” It also advocates for the return of millions of Palestinians to the homes their ancestors left or were forced from when Israel was established in 1948.

Israeli officials allege the BDS movement is anti-Semitic and seeks to destroy the country. Prime Minister Benjamin Netanyahu’s government has spent at least $15 million on combating BDS since 2015.

The campaign is reverberating in the United States, where the Senate passed a bill Tuesday that would allow states to punish businesses that take part in Israel boycotts.

But despite vigorous efforts to quash BDS, the pressure from those who support it is mounting.

Measures calling for boycotts of Israel, many of which are modeled on the anti-apartheid struggle in South Africa, including divesting from companies that sell to Israel’s army, are roiling college campuses.

During the summer, more than a dozen performers backed out of Israel’s Meteor Festival after headliner Lana Del Rey canceled.

Scientists, academics and even fruit fans have backed BDS: Grape exports to Europe from the Jordan Valley in the West Bank have fallen by 80 percent since 2007 because of boycotts, according to the head of the regional council there.

Airbnb announced Nov. 19 that it would stop listing some 200 properties in Jewish settlements in the West Bank — an area Israel seized in the 1967 Middle East War. Palestinians and most governments consider growing settlements — thought to house some 435,000 Jewish residents — illegal and a hindrance to peace. Around 3 million Palestinians also live in the West Bank.

The Airbnb decision prompted outbursts from Israeli officials and allies, with Israel’s tourism minister calling the decision “hypocritical and disgusting,” and threatening the company with legal action.

Senior Airbnb executives visited the West Bank and met with local Israeli officials and the company appeared to waver on its decision. And at the end of January, it was still possible to post new properties, and make and accept reservations on the site.

When asked to comment on its current position, an Airbnb spokesman pointed to a Jan. 17 statement that said it was “working with experts to develop and validate the means to implement our policy.”

Michael Oren, an American-born former Israeli ambassador to Washington, was among those who called for a boycott of Airbnb in November. He criticized the company for not applying similar policies to Tibet or to Turkish-occupied Cyprus.

Oren, who also serves as a minister in Netanyahu’s government, explained his reaction this way: BDS unfairly singles out Israel and is “designed to take us down.”

He referred to the BDS battle as a new stage in an ongoing Palestinian effort to destroy Israel, but not through terrorism. Instead, he argues, the country’s enemies want to delegitimize the country.

Oren said that the right of return is “code for the destruction of the state of Israel, flooding us with 6 million Palestinians who claim they are refugees.”

He also rejected the notion that the issue revolves around free speech, describing the boycott as “a bigoted assault on an American ally.”

Measures barring boycott supporters are another sign of how seriously Israel is taking the issue. In January 2018, the government released a list of 20 organizations whose members it bars from entering Israel because they support BDS. The list includes the American Friends Service Committee (a Quaker organization) which won the Nobel Peace Prize in 1947 for rescuing victims of the Nazis, as well as the left-wing Jewish Voice for Peace.