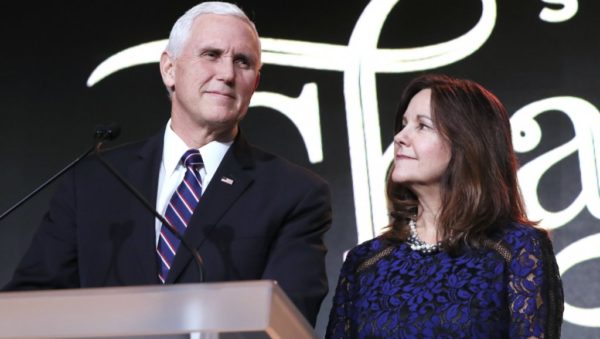 The announcement that Karen Pence, wife of Vice President Mike Pence, would be teaching at a Christian school that lists “homosexual sexual activity” as disqualifying criteria for employees has sparked debate on the role of such schools in the US.

For their supporters, the thousands of Christian schools across America are literally a blessing   a place where children can learn in accordance with biblical teachings, untainted by the secular norms of public schools.

To critics, many of these Christian schools venture too often into indoctrination, with teachings that can misrepresent science and history and potentially breed intolerance toward people with different outlooks.

“These schools are front and center in the politicisation of knowledge and that’s problematic,” said Julie Ingersoll, a professor of religious studies at the University of North Florida.

The polarized views have been highlighted in recent days after the appearance of an #ExposeChristianSchools hashtag on Twitter. It was introduced by Chris Stroop, an Indianapolis-based writer and activist, on Jan. 18, shortly after news broke that Karen Pence, wife of Vice President Mike Pence, would be teaching at a Christian school in northern Virginia that lists “homosexual or lesbian sexual activity” as among the disqualifying criteria for prospective employees.

Stroop, 38, calls himself an “ex-evangelical.” He says he attended Christian schools in Indiana and Colorado almost continuously from first grade through high school and recalls pervasive messaging that demeaned LGBT people and discouraged the empowerment of women.

“Not everything about it was bad   I had teachers I liked who encouraged me academically,” said Stroop, who went on to earn a Ph.D. at Stanford. “But I don’t think education as indoctrination is right.”

The news about Karen Pence’s teaching job was quickly followed by debate over the behavior of boys from Covington Catholic High School in Kentucky during a visit to Washington, D.C. While opinions varied widely as to whether the boys had behaved badly, that incident further fueled debate over faith-based schools.

Within days, there were thousands of responses to #ExposeChristianSchools on Twitter, including many personal stories of bad experiences by people who attended them.

One man said his school required students to sign an agreement promising not to listen to “worldly” music. Others faulted their curriculum, such as a Christian biology textbook that cited Scotland’s fabled Loch Ness Monster as evidence of flaws in Darwin’s theory of evolution.

‘The education itself was top notch’

Even as the critiques multiplied, many people took to Twitter to defend Christian schools. Among them was Greg Lukianoff, an attorney active in promoting freedom of speech on college campuses. He said he was an “outspoken atheist” beginning in the seventh grade and frequently skipped school.

“Only as an adult did I realize how kind & tolerant my Catholic high school was towards me,” he tweeted.

In a telephone interview Friday, Lukianoff said he had forged close friendships with people from religious and secular schools, and felt it was unproductive to generalise about them.

Even Brian Toale, a 65-year-old New Yorker who says he was repeatedly sexually abused in the early 1970s by a staffer at his Catholic high school on Long Island, recalls many positive aspects of his school years.

“The education itself was top notch,” he said. “I did have several extracurricular activities where I learned stuff and made friends I still have today.”

But Toale, who eventually converted to Judaism, says the school administration failed to properly vet the person who abused him, and later treated him with disdain when he reported the abuse.

According to the National Center for Education Statistics, about 5.9 million students   a tenth of the national prekindergarten through 12th grade total   attend private schools in the US About three-quarters of them attend one of the roughly 22,000 Christian schools.

By far, the Catholic Church accounts for the biggest share of this group, operating more than 6,300 schools serving more than 1.8 million students   about 20 percent of them non-Catholics. The totals are down sharply from the early 1960s when there were more than 5.2 million students in almost 13,000 Catholic schools nationwide.

Julie Ingersoll, the religious studies professor, says those schools are faring well, at least in the eyes of their supporters. She notes that many are now able to access publicly funded tax credits and vouchers in various states, and often can operate with limited regulation.

“But this leaves kids vulnerable on all kinds of levels, which of course was what the hashtag was about,” Ingersoll said in an email. “It’s been portrayed as a campaign against Christianity from ‘the left,’ but it was really a group of young adults who grew up in Christian schools (and Christian home schooling) explaining how they believe they were personally harmed by it.”

“These harms were often related to sex, gender, shame, and abuse,” she wrote. “But stories also detailed impoverished education, especially when it came to science and history.”

The Rev. Russell Moore, a high-profile official with the Southern Baptist Convention, said the recent criticisms of Christian schools reflect some broader societal trends that have riled conservative religious leaders.

“There’s a certain mindset in America that sees any religious conviction as authoritarian,” Moore said.

Overall, Christian schooling “is in a very good place,” Moore said. “There are some phenomenal evangelical schools, preparing their children with remarkable academic rigor.”

John Gehring, Catholic program director at a Washington-based clergy network called Faith in Public Life, graduated from an all-male Catholic prep school near Baltimore. He has suggested in recent articles that such schools   while admirable in many ways   could do a better job of teaching their students about the church’s historical role in exploitation and oppression.

“I’m frustrated by the overheated commentary where Christian and public schools are almost viewed as enemy combatants in the culture wars,” Gehring said. “Each has their place, and like any institution they have strengths and weaknesses. The Catholic schools I attended through college shaped my understanding of justice and cultivated a spirituality that frames my life, even if those environments could sometimes be a little cloistered and privileged.”