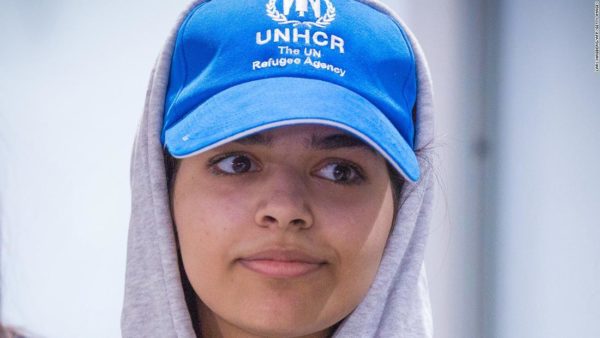 Saudi teenager Rahaf Mohammed al-Qunun arrives at Pearson International airport in Toronto, Ontario, on January 12, 2019. – The young Saudi woman fled her family seeking asylum landed in after successfully harnessing the power of Twitter to stave off deportation from Thailand.
Share:

Dawn was breaking in Sydney when Nourah’s phone rang. “I need you to help me. I need you to speak to people on my behalf,” the 20-year-old Saudi asylum-seeker recalled the caller saying.

The woman — a Saudi teen who identified herself as Rahaf al-Qunun — explained to Nourah that her passport had been confiscated at a Bangkok airport, and Thai authorities were threatening to deport her. Qunun’s story captured international attention last month with her impassioned Twitter plea for asylum.
While Qunun barricaded herself in an airport hotel room to prevent her deportation, Nourah — who declined to reveal her full name for security reasons — was pacing up and down a public park in Sydney, making calls to Western news outlets. She had never met Qunun, but Nourah had recently also fled Saudi Arabia. She didn’t need to know who Qunun was, she said, to understand the urgency of her situation. Within days, Qunun was granted asylum in Canada.

“I picked up my phone and spoke to people about Rahaf (al-Qunun) because I am in a free country, a country that wasn’t going to jail me because of what I was saying on the phone,” Nourah told CNN.

“The case wasn’t about Rahaf. It was about all Saudi women. If any Saudi woman had asked me for help, I would have done the same thing, with the same determination,” she said.
For 72 hours, Nourah and two other Saudi women posted to social media and, without identifying themselves, gave media interviews. They tweeted about Saudi Arabia’s restrictive male guardianship laws, writing that the legal code granted men considerable impunity, making widespread the alleged domestic abuse that Qunun said she was escaping.
It’s made asylum “a very popular idea in Saudi Arabia,” according to Nourah. The lure of asylum-seeking has been compounded, activists and analysts say, by Crown Prince Mohammed bin Salman’s campaign to stamp out dissent in the kingdom. In recent years, he has ordered the rounding up of scores of high-profile clerics, analysts, businessmen and princes, as well as women’s rights defenders who were allegedly tortured and who authorities accuse of “suspicious contact” with foreign entities.
The Saudi government has denied the allegations of torture and said it does not “condone, promote or allow the use of torture.”
The prince has been under intense international scrutiny after Saudi journalist Jamal Khashoggi was killed at the kingdom’s Istanbul consulate last October. Saudi Arabia has described it as a botched attempt to return the critic to Saudi Arabia, and said the killers would be brought to justice.
But for some Saudis abroad, said Saudi activist Yahya Assiri, it underscored what they already suspected: that the kingdom and its foreign offices were off-limits to critics.
“It’s absolutely impossible that I would ever go to the Saudi Embassy,” the London-based dissident told CNN shortly after news of Khashoggi’s disappearance broke. “I refused to go before, and the Khashoggi situation has made my decision even clearer.”
In 2013, Assiri, a former member of the Saudi Royal Air Force, went to the United Kingdom to study human rights. He applied for asylum a year later, and he is now a Saudi refugee. His status allows him to steer clear of Saudi officials, he said, eliminating the risk taken by Khashoggi on October 2, when he entered his country’s consulate for paperwork that would allow him to marry and never re-emerged.

Saudi refugees on the rise

The Arabia Foundation’s Shihabi said he’s skeptical that women could be leaving Saudi Arabia because of current political conditions. Social reforms introduced by MBS have improved women’s conditions in the kingdom “dramatically,” he said.
He said the frequency of reported women’s escapes in recent months could be due, instead, to greater willingness for Western countries to host asylum-seekers in the aftermath of the Khashoggi fallout. “There’s an appetite in the world with the demonization that’s happening to Saudi Arabia that creates more opportunities (for asylum),” said Shihabi.
But many activists and Saudi feminist groups argue that the reforms pushed by the crown prince have reached a standstill, precipitating the urgency to flee.
“There has been tremendous increase in the number of Saudi women leaving the country especially in light of MBS and the imprisonment of Saudi activists,” said Saudi human rights officer Ahmadi, who is now based in Seattle and says she is regularly contacted for advice by women seeking to flee.
“I think a lot of women feel unsafe and they feel like any chances or hope that they had that things would be better has almost gone by now. It’s fight or flight. Fight is no longer there so it’s literally just flight.”
For Nourah, who says she had been plotting her escape for much of her life, it was her parents choosing her future husband on her behalf that accelerated her decision.
“The idea of escaping was always with me, and I used to put money aside with the idea that I would one day leave,” said Nourah.
“The Saudi government keeps trying to convince me that I’ve turned myself into a homeless person,” she said. “But, in truth, my escape from Saudi Arabia was the best decision I’ve ever made in my life.”
CNN
Share: