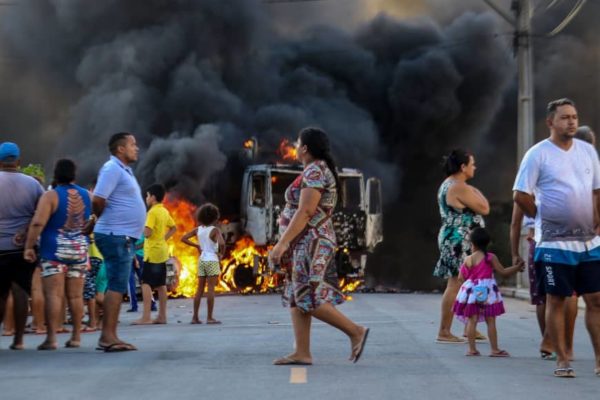 A truck burns during a wave of gang violence in the Conjunto Palmeiras neighborhood of Fortaleza, in Ceara state, Brazil, on Thursday. The justice minister in new President Jair Bolsonaro’s government on Friday ordered troops to the northeastern city in a bid to contain violence by criminal groups there. | AFP-JIJI
Share:

A special deployment of Brazilian troops began fanning out in the northern city of Fortaleza Saturday with orders to stop a spike in violent attacks by criminal gangs against banks, buses and shops, officials said.

By the end of the weekend, 300 soldiers will be patrolling that city and other towns in Ceara state in a bid to halt the rampage, national public security secretary Guilherme Teophilo said, according to government news agency Agencia Brasil.

The intervention is the first test of new President Jair Bolsonaro’s strict law-and-order platform since he took office last Tuesday.

His justice minister ordered the deployment after concluding that Ceara police were overwhelmed. Some 50 suspects have been arrested.

The gangs terrorizing Fortaleza could be seen torching service stations in security videos aired by Brazilian media. Dozens of attacks have been registered this week, forcing residents to stay at home and leaving main roads deserted.

In one attack, explosives badly damaged a pillar supporting a flyover road in the town of Caucaia, just to the west of Fortaleza.

The triggers for the wave of violence were being investigated, but intelligence reports published by media suggested gangs were revolting against tough new measures recently imposed in the state’s prisons.

The changes include blocks on cellphone signals and an end to a policy of separating inmates according to gang affiliation.

Two gangs have set aside their rivalry to join forces against the government, the G1 news website reported, citing security officials.

Bolsonaro has vowed to crack down on Brazil’s rampant crime by extending immunity to soldiers and police using lethal force and easing gun laws so “good” citizens can challenge armed criminals.

The far-right president, a 63-year-old former paratrooper, has made “restoring order” a centerpiece of his four-year mandate.

Much of that task falls to his justice minister, Sergio Moro, a former star judge who headed up Operation Car Wash, an investigation into Brazil’s biggest-ever corruption scandal.

Bolsonaro on Friday praised Moro’s decision to send in troops as “apt, rapid and effective.”

Ceara’s governor belongs to the leftwing Workers Party which was driven into opposition by the election of Bolsonaro and his ultraconservative allies.

Brazil has the third biggest prison population in the world, behind the United States and China, with nearly 73,000 inmates as of 2016. Penitentiaries are overcrowded and prey to gangs that often viciously turn on each other.

The three gangs active in Ceara are the Red Command (CV by its initials in Portuguese) that grew out of organized criminal activity in Rio de Janeiro, the First Command of the Capital (PCC) based in Sao Paulo, and a group called the Guardians of the State (GDE).

Of those, the CV and the PCC are said to have sealed a “non-aggression” pact against each other in Ceara to focus against the government forces.

The 300 troops sent to reinforce state security forces will have a big task. Nearly 80 attacks have been reported in towns across Ceara state this week. The Brazilian state is larger than Costa Rica or Croatia.