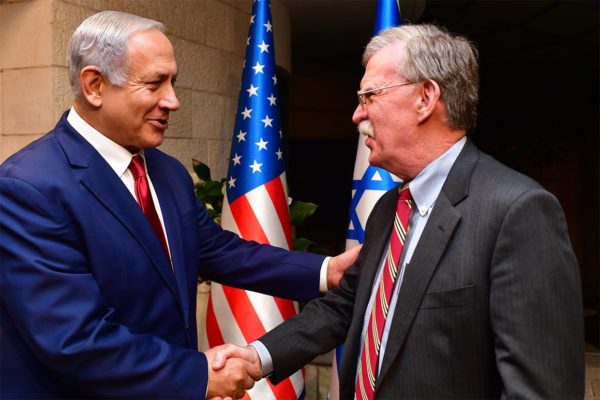 JERUSALEM — US National security adviser John Bolton on Sunday sought to reassure Israeli leaders who fear that President Donald Trump’s plan to withdraw U.S. troops from Syria might increase the risk of war with Iran.

Bolton held meetings here with top security and intelligence officials Sunday to help reassure Israel that the U.S. intends to protect it from Iranian aggression even after the 2,000 U.S. troops stationed in Syria, where Iran has a growing military presence, are gone.

The meetings were part of what U.S. officials, diplomats and outside experts called a damage-control tour by the top Trump adviser — who himself disagreed with the president’s December troop withdrawal decision — in part because Bolton believes the U.S. must challenge Iran’s influence in the war-ravaged country.

Bolton met with the Israelis amid multiple signals that an American withdrawal from Syria will be slower than Trump first indicated last month. He and Trump both said on Sunday that there is no specific timeline for the exit.

Speaking alongside Israeli Prime Minister Benjamin Netanyahu before the two men had dinner, Bolton also reaffirmed U.S. support for Israel. “We now have the best U.S.-Israel relationship in our history, and on our side we’re certainly determined to continue that,” Bolton said. In an implicit message to Iran, he warned that any country contemplating aggression against Israel should “think again.”

But Israeli officials fear that even talk of a U.S. withdrawal will embolden Iranian efforts to open up a new front against Israel from neighboring Syria. Iran has exploited Syria’s bloody civil war to establish a military presence in the country, and in recent months Israel has conducted airstrikes against Iranian positions inside Syrian territory.

At a weekly Cabinet meeting hours before meeting Bolton, Netanyahu said Israel would continue to act against Iranian military entrenchment in Syria.

“We are acting against any actor that is undermining or trying to undermine Israel’s security,” he said.

Israeli officials say the American imposition of financial sanctions on Iran after the U.S. pulled out of the nuclear deal last year, coupled with military action, have made it harder for Iran to operate inside Syria.

But they worry that a U.S. departure from Syria could lead Israel to become even more aggressive in striking Iranian positions across the border, risking an escalation that could lead to a wider clash with Iran’s Islamist regime, which Israel sees as a much more dangerous threat to its existence than ISIS.

“We have been working with the U.S. for the last few years to beat back Iran, and by and large the policy was working,” an Israeli official told Politico. “If Iran sees this as an opportunity, and all progress that has been made is reversed, this could force us into a confrontation.”

The departure of Defense Secretary Jim Mattis, who resigned last month, in part over Trump’s Syria decision, is seen as a blow to Israel, officials said, because he saw keeping U.S. troops in Syria as crucial to the strategy to thwart Iranian aggression. Israeli officials also view Bolton as understanding the strategic importance of the U.S. presence in Syria.

Israeli Prime Minister Benjamin Netanyahu said Sunday that he planned to take Bolton on a Monday tour of the Golan Heights on the Israeli-Syrian border, saying it has great strategic significance for Israel. The trip was later canceled due to inclement weather.

“When you’re there, you’ll understand why we’ll never leave the Golan Heights, and why it’s important for all countries to recognize Israeli sovereignty” over the region, captured from Syria in 1967, he said. Netanyahu added that he has discussed the issue with Trump.

Israel is still trying to make sense of Trump’s sudden, mid-December announcement that he would order an immediate and complete withdrawal of U.S. forces from Syria. The statement blindsided even members of his own government. Trump said at the time ISIS had been defeated and there was no longer a reason to maintain a U.S. presence.

Bolton, a longtime Iran hawk, thought he had crafted a strategy for the U.S. to stay in Syria until all Iranian forces were out of the country.

Days later, Trump softened the timing, promising on Twitter a “slow & highly coordinated pullout of U.S. troops.” Bolton reiterated Sunday there is no timeline for the withdrawal, and Trump said at the White House that U.S. forces would not leave Syria until the last vestiges of the Islamic State had been stamped out, a process that could take many months.

Bolton, who will travel to Turkey on Monday, is tag-teaming with Secretary of State Mike Pompeo, who will leave Washington on Tuesday to visit several Arab allies to contain the fallout from Trump’s decision and, in Bolton’s words, “elaborate” on U.S. plans.

Alongside Netanyahu, Bolton went to great lengths to reaffirm the U.S. commitment to Israel’s right to self-defense.

Bolton, Trump’s third national security adviser in two years began the day paying respect to Israel’s territorial claims on Jerusalem’s Old City, visiting the Western Wall and touring the tunnels underneath which cross into the Muslim quarter. Once avoided by U.S. officials declining to take sides in the territorial dispute, the wall is now a common destination for visiting dignitaries from the Trump administration.

Even before Trump’s announcement, Israel has grown increasingly concerned about prospect of Iranian forces taking up new positions along Israel’s border with Syria. Israel has already launched more than 200 strikes against Iranian targets in Syria, including infrastructure and convoys transferring weapons to Hezbollah. Its government now wants the U.S. to pressure Russia — which like Iran has been providing military and financial support to Syria’s anti-U.S. regime — to allow continued freedom of operation in Syria for its military.

U.S. officials said they expect Washington to increase intelligence sharing and military cooperation with Israel to compensate for any reduction in U.S. military power in the region.

“Trump diplomacy is a different way of looking at things,” one senior administration official told POLITICO. “It’s: ‘What are you guys going to bring to the table and what can we uniquely do that you can’t? That is where we are.”

But given decades of extremely close cooperation between the U.S. and Israel, it is unclear what more the Trump administration can do, and Bolton did not announce any specific new policy measures.

Bolton did discuss plans for the U.S. to keep some forces at the al-Tanf military base near the Jordanian border, where a few hundred allied troops are current stationed. Located on a road that stretches from Tehran through Baghdad to Damascus, the base is seen as critical to U.S. efforts to countering Iranian influence in the region.

Bolton himself called Tanf “very strategically important in connection with our determination that Iran not achieve this arc of control stretching from Iran thru Iraq into Lebanon and into Syria,” an area also known as the “Shiite crescent.”

A senior administration traveling with Bolton said the forces could stay in Tanf indefinitely, a move that could satisfy Israeli concerns and serve as a continued bulwark against Iran.

Countering Iranian aggression in the region has become a common cause among Israel, Egypt, Jordan and the Persian Gulf states.

On Monday, Bolton travels to Ankara for critical meetings with President Recep Tayyip Erdogan. He will be joined by the chairman of the Joint Chiefs of Staff, Gen. Joseph Dunford, who will continue negotiations after Bolton leaves.

When Trump first announced he was pulling U.S. troops out of Syria, he said Turkey’s military could finish off ISIS. Bolton walked that back a bit, saying of Turkey that he wants to “find out what their objectives and capabilities are and that remains uncertain.”

The Trump adviser suggested that he is concerned about Kurdish fighters who for years have provided the U.S. with crucial assistance in the anti-ISIS campaign. Ankara considers those fighters terrorists aligned with Kurdish separatists inside Turkey and might seek to attack them.

“We don’t think the Turks ought to undertake military action that’s not fully coordinated with and agreed to by the United States, at a minimum, so they don’t endanger our troops,” adding that Turkish operations must “meet the president’s requirement that the Syrian opposition forces that have fought with us are not endangered.”

Bolton said Washington will condition the pullout with Turkish assurances it will not launch an offensive against Kurdish forces.

A senior administration official traveling with Bolton told reporters the U.S. believes the campaign against the remnants of ISIS in Syria is “pretty much close to done” and the remaining pockets can be eliminated in a matter of weeks, suggesting a decisive battle before the U.S. pullout.

Many of those troops are expected to move to neighboring Iraq, and U.S. officials said the United States is likely to maintain some air presence in northern Syria.

In an interview with Newsmax last week, Pompeo said part of the U.S. goal is “ensuring that the Turks don’t slaughter the Kurds,” a comment that drew criticism from Turkish officials.

Ambassador James Jeffrey, the U.S. envoy to Syria who was also tapped Friday to lead efforts against ISIS, will also take part in the talks in Ankara. He is expected to travel to Syria sometime next week to dissuade the Kurds from plans to cut a deal with President Bashar Assad.

The U.S. also doesn’t want a battle between Turkey and the Kurds in northeastern Syria, which could lead to chaos that Iran could exploit.

“It’s going to be a different environment after we leave, there is no question about that,” Bolton said. “But there is no desire to see Iran’s influence spread, that’s for sure.“

En route to Israel, Bolton warned the Assad regime that the Trump administration would respond aggressively if it used chemical weapons after a U.S. withdrawal. “A lot of options would be on the table,” Bolton said.

Noting that the U.S. has already twice launched strikes to respond to the regime’s chemical weapons use, he said if it were to happen again “the next one would be more telling.”