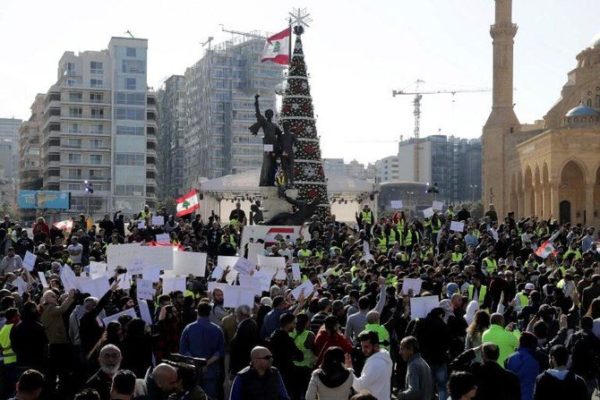 Businesses and public-sector agencies in Lebanon staged a strike on Friday amid growing anger over a fragile economy crippled by an eight-month delay in forming a government.

Beirut’s port was closed, along with state institutions such as the National Social Security Fund. The gates to the electricity company compound were locked with chains and flights stopped for an hour at Rafic Hariri International Airport.

The strike was called by the General Confederation of Lebanese Workers, with the backing of the new cross-sectarian Sabaa Party.

“The country is heading toward collapse … this is what all the politicians are saying,” said Victoria El-Khoury Zwein, a cofounder of Sabaa. “What we are saying is that the country is in crisis and therefore we need a government that should be running affairs during this crisis and come up with a quick rescue plan.”

Bechara Asmar, head of the General Confederation of Lebanese Workers, said: “The strike is directed toward politicians who failed to produce a Cabinet. Is demanding that a government solve the problems a shame?”

Lebanon’s national debt has soared to $84 billion, or 155 percent of the gross domestic product, and unemployment is at 36 percent.

The global ratings agency Moody’s has given the economy a “low (+)” grading because of “the deterioration in the regional economic and political environment.”

International donors have pledged more than $11 billion in aid and development loans for Lebanon, but the funds are frozen until the country has a stable government. Prime Minister Saad Hariri has been unable to form a Cabinet since parliamentary elections last May because of squabbling over ministerial posts that must be distributed according to a strict sectarian power-sharing system.

The paradox of Friday’s strike action was not lost on many Lebanese. “You have countries where people are protesting to bring down the government. Here we are protesting to form one,” Philippe Safar, who runs a barbershop in Beirut, told Arab News.

Nevertheless, many ignored the strike call and went about their business as usual. “The Lebanese don’t go out and protest because they are split, they know that each sect takes its share,” said Abbas, a tobacco shop owner in Beirut’s Hamra district.

“Lebanon won’t become a united nation until sectarianism is canceled. The government should be the people’s guide, not the sects.”

Ibrahim Slim, a telephone shop owner, also argued that Lebanon’s problem was sectarian division. “At the end of the day, those protesting are going down with their sects and political parties, not with the country and united,” he told Arab News.