No other US Congress has ever looked like this 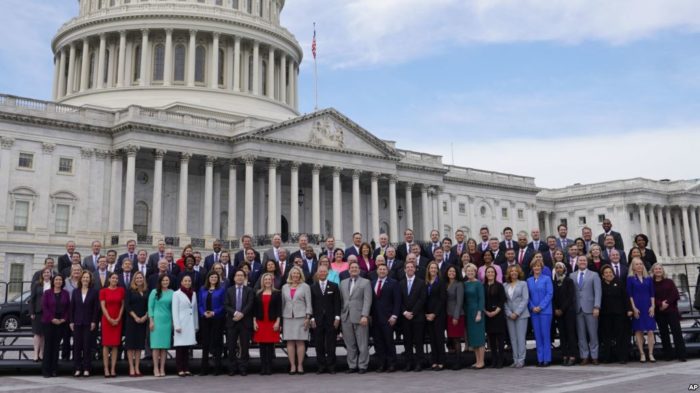 Members of the freshman class of Congress pose for a photo on Capitol Hill in Washington, Nov. 14, 2018, in Washington.
Share:

By Clare Foran and Phil Mattingly

The 116th class of Congress broke barriers before its members even set foot in Washington.

One example: Rep.-elect Ilhan Omar, a Minnesota Democrat who will be the first Somali-American member of Congress, noted the history of her election on Twitter on Wednesday night.
“23 years ago, from a refugee camp in Kenya, my father and I arrived at an airport in Washington DC,” she tweeted, along with a photo of her and her father smiling with suitcases. “Today, we return to that same airport on the eve of my swearing in as the first Somali-American in Congress.”

Omar is just one of dozens of stories starting a new chapter Thursday. There are record numbers of women who will be sworn in in just a few hours. Muslim women will be serving for the first time — including Omar and Rep.-elect Rashida Tlaib of Michigan — as will Native American women, including Reps.-elect Sharice Davids and Deb Haaland. The state of Texas sent the state’s first two Latina members to Congress, and two black congresswomen-elect from New England will also make history by coming to Washington. The historic firsts come from both parties and at least one member — Rep.-elect Alexandria Ocasio Cortez of New York — will be younger than 30.

Democrats seize control of the House on Thursday with fresh voices and new energy as they prepare to take on President Donald Trump, many of them inspired to run because of his presidency.
They’ll be led by a barrier breaker as well. Longtime Democratic leader Nancy Pelosi of California is poised to make history by winning back the speaker’s gavel and reclaiming a title she had held from 2007 to 2011, when she served as the first and still so far only female House speaker.
The party breakdown in the new House of Representatives will be 235 Democrats and 199 Republicans, with one congressional race in North Carolina still unresolved. In the Senate there will be 53 Republicans and 47 Democrats, a total that includes two independents who caucus with the Democrats.
The record number of women elected to Congress were key to Democrats’ reclaiming the majority in the House. Though Republicans, on the other hand, lost female representation.
Congress itself is changing to meet the new members coming to Capitol Hill. The new class also includes more women with young children, and female Congress members have recently been even more vocal in forcing the US legislative branch to catch up with the needs of members who are juggling child care and official duties. NPR reported Tuesday that the new Congress opened a new child care facility exclusively for employees of the House of Representatives.
The #MeToo movement is front and center as women take on new positions of leadership. Last month, Congress passed legislation to overhaul the way Capitol Hill addresses sexual harassment.

Incoming Democratic Reps. Rashida Tlaib of Michigan and Ilhan Omar of Minnesota are the firstMuslim women elected to serve in Congress.

Omar also has the distinction of becoming the first Somali-American member of Congress. She came to the US more than two decades ago as a refugee.
Tlaib is the first Palestinian-American woman to be elected to Congress. The daughter of Palestinian immigrants, she became the first Muslim female member of Michigan’s state Legislature a decade ago.

Youngest woman ever elected to Congress

Incoming Democratic Rep. Alexandria Ocasio-Cortez of New York, who is 29 years old, will become the youngest woman ever in Congress.
Abby Finkenauer, a 30-year-old Democrat who was elected to an Iowa US House seat, will also be one of the youngest members of Congress.

Republican Marsha Blackburn will be the first female senator from Tennessee.
Republican Cindy Hyde-Smith made history in the midterms by becoming the first woman elected to Congress from Mississippi.
Democrat Kyrsten Sinema became the first female senator elected to represent Arizona. Sinema will also make history as the first openly bisexual senator.
The state of Texas will be sending its first Latinas to Congress after Democrats Veronica Escobar and Sylvia Garcia won their congressional races to serve in the House of Representatives.
Incoming Democratic Rep. Ayanna Pressley will be the first black congresswoman to represent Massachusetts, while Democrat Jahana Hayes will be the first black congresswoman from Connecticut.

New members will have to navigate a new political landscape

Newly elected members have been sharing their experiences on social media in a way we’ve never seen before.
There was Ocasio-Cortez using her Instagram stories to take people behind the scenes of the traditionally closed-door new-member orientation process, from office selection to learning the byzantine House tunnel complex, and using Instagram Lives to talk politics and take questions while making Instant Pot macaroni and cheese. There were fellow progressive newcomers, like Omar and Tlaib, never hesitating to use Twitter to fire back at critics (or traditional House floor rules) in a clear effort to announce the arrival of a new generation of politicos. There was incoming GOP Rep. Dan Crenshaw tweeting his New Year’s resolutions (including No. 5: get better at double ax throwing, with a video of said subpar double ax throw included, of course).
As new elected members get used to Washington — hiring their staffs, figuring out their office budgets and figuring out which apartments to rent — they’ll also be faced with trying to navigate a new political landscape on both sides of the aisle.
For Republicans, most have aligned themselves with Trump.
Voices on the other side of the aisle are less united.
Progressive firebrands like Ocasio-Cortez, who promised to mobilize the resistance, have been elected to the same party as conservative and moderate Democrats who won in districts that went for Trump in 2016 — and they want to keep those seats in 2020.
On one side, progressives ran on promises of impeaching Trump, abolishing Immigration and Customs Enforcement, raising the minimum wage and “Medicare-for-all.”
Moderates, on the other hand, promised to prioritize small businesses, tweak the existing health care system, and work with Republicans and Trump when they can.
As the 2020 presidential election nears, and Democrats try to decide what kind of candidate they want to run, don’t expect these new voices to stay quiet.
CNN
Share: