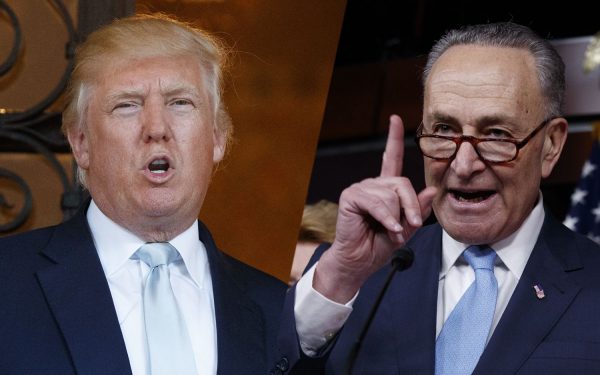 President Trump on Saturday called on Democrats to “come on over and make a deal” as the partial government shutdown enters its eighth day with no agreement in sight.

“I am in the White House waiting for the Democrats to come on over and make a deal on Border Security,” Trump tweeted late Saturday morning.

“From what I hear, they are spending so much time on Presidential Harassment that they have little time left for things like stopping crime and our military!”

White House officials and congressional Republicans have sought to blame the partial shutdown that is affecting about 25 percent of the federal government on Speaker-designate Nancy Pelosi (D-Calif.).

The White House has also attempted to portray a split between Pelosi and Senate Democratic Leader Charles Schumer (N.Y.) over efforts to secure a deal to reopen the government.

“The vice president and I met with Leader Schumer last Saturday, the last time we sat down face to face, and my gut was that he was really interested in doing a deal and coming to some sort of compromise,” Mulvaney said Friday on Fox News. “But the more we’re hearing this week is that it’s Nancy Pelosi who’s preventing that from happening.”

About a quarter of the federal government closed down last Saturday amid deadlocked negotiations over funding for Trump’s proposed wall along the U.S.-Mexico border.

Neither the House nor the Senate held votes this week to reopen the government, and many agencies will likely remain closed into 2019 and when the new Congress begins on Jan. 3.

Republicans and Democrats are still divided over Trump’s demand for $5 billion for a border wall as part of any funding legislation to reopen shuttered federal agencies.

The Senate had previously passed a government funding bill without extra money for a border wall, but after pressure from conservative allies, Trump declared that he would not sign the bill without money for his signature wall.

The House passed a bill last week with $5.7 billion in border funding, but the measure does not have the votes to pass in the upper chamber.

Democrats in both chambers have declared their opposition to the border wall, with Pelosi calling it a “non-starter.”

The shutdown has resulted in the furloughs of hundreds of thousands of federal employees and the shuttering of various government agencies, including the departments of Homeland Security, Agriculture, Treasury, Commerce, Justice, Interior and State, among others.

The president this week suggested that Democrats only opposed the wall because he suggested it, not out of principle.

“The Democrats don’t want to let us have strong borders, only for one reason. You know why? Because I want it,” he said during a visit with troops in Iraq.