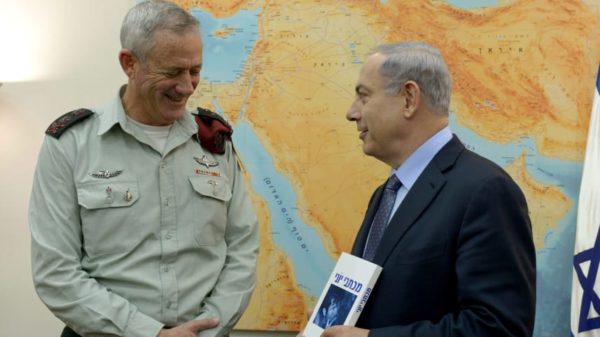 Prime Minister Benjamin Netanyahu meets with the General Chief of Staff Lt. Gen. Benjamin Gantz, who will now enter politics, at the end of his military career, February 2015
Share:

Details about Benny Gantz’s Israel Resilience Party, leaked to local media after it was registered, gave little indication of its ideological tilt.

Along with preserving Israel as “a Jewish and democratic country”, the party pledged unspecified changes to priorities in national security and the economy.

Polling has predicted an easy win for Netanyahu in the April 9 election, with his rightist Likud party taking around 30 of parliament’s 120 seats and on course to form a right-wing coalition government similar to the current cabinet.

The surveys, published after Netanyahu announced on Monday an election some seven months before one was due by law, gave second place to a then-hypothetical Gantz party. The polls forecast it would take around 15 seats.

Netanyahu is running for a fifth term under the shadow of three corruption investigations in which police have recommended his indictment. He has denied any wrongdoing.

Israel’s attorney-general has still to decide whether to charge Netanyahu and it is unclear whether he will make his announcement before the election.

Should Gantz emerge as a center-left candidate, that could work in Netanyahu’s favor by further fracturing an already disparate opposition bloc.

Gantz, 59, became Israel’s top general in 2011 after stints as commander of forces on the combustible northern frontier with Syria and Lebanon and as military attache in Washington. During his four-year term he oversaw two wars in the Hamas-ruled Gaza Strip.