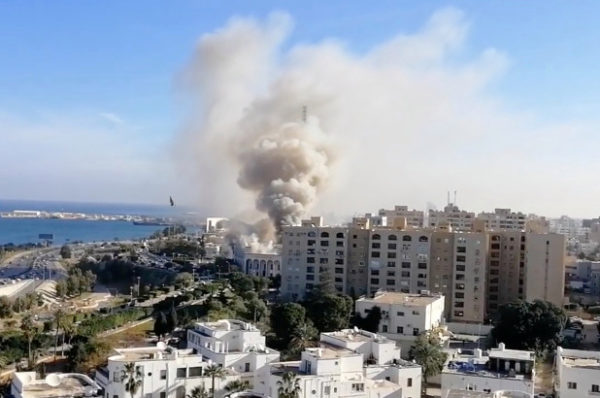 Islamic State (ISIS) claimed responsibility for an attack on Libya’s Foreign Ministry in Tripoli, the group said early on Wednesday on its news agency Amaq.

ISIS  said three of its members carried out the attack that killed at least two people on Tuesday.

The suicide bombers first detonated a car bomb and then rushed into the building, where one blew himself up on the second floor and another was killed when a suitcase he was carrying exploded, said special forces spokesman Tarak al-Dawass.

The third assailant, who was unarmed and wearing a bulletproof vest, was gunned down by security forces outside, Dawass added.

A source from the Revolutionary Brigade, one of the strongest armed groups in the capital, told Reuters that its spokesman, Abdulrahman Mazoughi, died in the attack.

The United Nations in Libya condemned the “cowardly terrorist” attack.

“Terrorism will not triumph over the Libyans’ decision to move forward toward building their state and renouncing violence,” Ghassan Salamé, the UN special envoy to Libya, said in a statement.

“We will work with the Libyan people to prevent terrorist groups from turning Libya into a haven or an arena for their crimes,” he added.

Siala called for a partial lifting of the UN arms embargo on Libya to help authorities counter militant groups. He said the foreign ministry was targeted because “it is a symbol of sovereignty.”

Libya has been a haven for militants since a 2011 uprising toppled dictator Moammar Gadhafi. The country is split between rival governments, each backed by a variety of local militias.

“The Libyan people are waging a war on terrorism on behalf of the world,” the ministry said.

In 2015, ISIS took advantage of the chaos to gain a foothold in the coastal city of Sirte — but lost it late in 2016 to local forces backed by American air strikes.

After eight months of fighting, forces loyal to the UN-backed Government of National Accord regained control of the city.

In September, ISIS claimed responsibility for a suicide attack on the headquarters of Libya’s National Oil Co. in Tripoli that left two dead and 10 wounded.

Four months earlier, it claimed an attack on the electoral commission’s headquarters that killed 14 people.

In April, the GNA launched an operation to track down ISIS militants operating in areas of western Libya under its control.

Last month, the group claimed responsibility for an attack on militia forces in southeastern Libya in which at least nine people were killed.