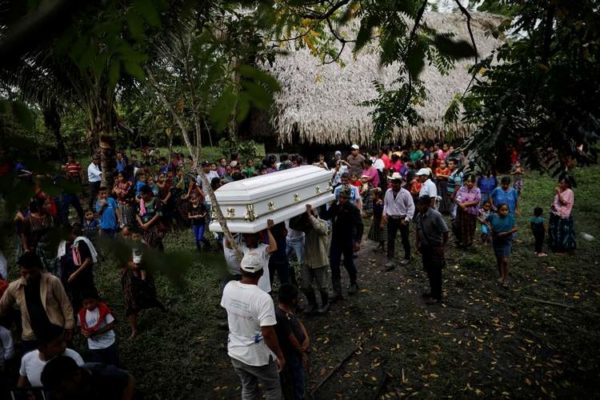 Friends and family carry a coffin with the remains of 8-year-old boy who died after developing a high fever while in the custody of U.S. Customs and Border Protection Dec 25, 2018. REUTERS/Carlos Barria
Share:

An 8-year-old boy from Guatemala died in United States custody early Christmas Day, the second death of a child in detention at the southwest border in less than three weeks, raising questions about the ability of federal agents running the crowded migrant border facilities to care for those who fall ill.

The number of migrant families and unaccompanied minors journeying over land to the United States has swelled in the last year. Migrants are usually transferred to facilities designed to hold adults after being arrested by federal authorities while attempting to enter the country illegally or after being processed at a port of entry.

The boy, who has not been named, died just after midnight on Tuesday at a hospital in Alamogordo, N.M., where he and his father had been taken after a Border Patrol agent saw what appeared to be signs of sickness, according to United States Customs and Border Protection. His death follows that of a 7-year-old girl from the same country while also in the custody of the Border Patrol.

Much about the circumstances of the boy’s death remains unknown. It is not clear whether his condition was attributable to the care he received in the facilities, the result of an arduous journey, or some combination of the two.

The border facilities have absorbed more children than was ever intended when they were built, presenting challenges for those tasked with caring for migrant families.

At first, the boy was thought to have a cold, but staff at the hospital, the Gerald Champion Regional Medical Center, later found that he also had a fever, according to the agency.

He was held at the hospital for an additional 90 minutes for observation and then released on Monday afternoon with prescriptions for amoxicillin, a commonly prescribed antibiotic, and ibuprofen, which is often used for relieving pain and reducing fever.

On Monday night, however, the boy grew nauseated and vomited, prompting border authorities to take him back to the hospital, where he died.

The cause of death is not known, but an internal review will be conducted, according to the agency, which said it had notified the government of Guatemala. Officials at the Department of Homeland Security did not immediately respond to requests for additional information related to the boy’s death.

The other migrant child from Guatemala, Jakelin Caal Maquin, died this month in United States custody in New Mexico. Border Patrol said Jakelin had died from dehydration, but her father, Nery Gilberto Caal Cruz, disputed that assertion, saying he “made sure she was fed and had sufficient water.”

While details about the boy’s death are scant and there is no evidence so far that conditions in detention were the cause, the proximity of the two children’s deaths is already renewing debate about the Trump administration’s immigration policies.

Medical professionals and advocates said on Tuesday that a second death of a child at the border highlighted the risks of keeping vulnerable children in what they called overcrowded, often cold facilities known as “hieleras,” Spanish for ice boxes. Children are not supposed to remain in the facilities for more than 72 hours.

“These facilities are no place for a child, even a well child,” said Marsha Griffin, a pediatrician on the Texas-Mexico border and the co-chairwoman of the American Academy of Pediatrics’s special interest group on immigrant health.

“The conditions in which these children are being held are truly shocking,” said Dr. Griffin, who said that children who fall ill are not receiving adequate care. “It’s cold, and they are susceptible to influenza and dehydration.”

Kevin K. McAleenan, the commissioner of Customs and Border Protection, said in July that the facilities were built in the 1980s and ’90s to temporarily house migrant adults, not families and children.

“They were built for single adults,” he said. “Think of it like a police station, like short-term detention before they’re turned over to a jail or a longer-term facility. In immigration, it’s ICE. They were not built to handle families and children.”