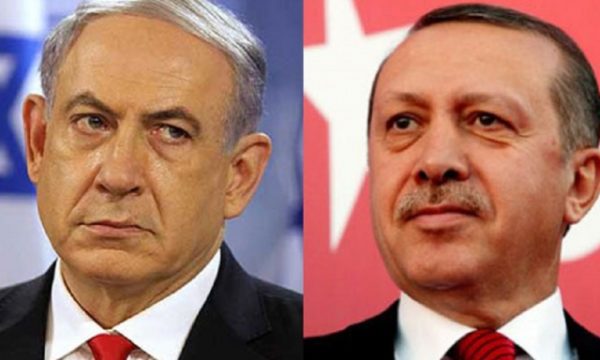 Israeli Prime Minister Benjamin Netanyahu lashed out at Turkish President Recep Tayyip Erdogan on Sunday, calling him an “anti-Semitic dictator” as a war of words between Ankara and Jerusalem gathered steam.

“I was just exposed to the daily trolling of the anti-Semitic dictator Erdogan,” Netanyahu said at a holiday event for Christian soldiers of the IDF.

“He is obsessed with Israel. He knows what a moral army is and he knows what a genuine democracy is, as opposed to an army that massacres women and children in Kurdish villages and a state which, to my regret, is becoming more dictatorial day by day,” Netanyahu said. “He is obsessed with Israel. But there has been an improvement. Erdogan used to attack me every two hours and now it is every six hours.”

The row began when Erdogan claimed Saturday that “Jews in Israel” beat defenseless Palestinian people, including women and children, and threatened to “teach them a lesson.”

“You are the voice of the oppressor, you are waging state terrorism,” Erdogan said of Netanyahu in a speech in Istanbul on Sunday. “You are kicking women and children as your police drag them.” Foreign Minister Mevlut Cavusoglu ratcheted things up on Monday, calling Netanyahu a “baby killer.”

The occupier which kicks people lying on the ground is easily offended: @netanyahu is a cold-blooded killer of modern times, responsible for massacres of thousands of innocent Palestinians, bombing children on beaches. Turkey will never stop exposing the truth. pic.twitter.com/gr5NcDwO8S

Erdogan’s remarks came in response to a tweet posted by Netanyahu earlier in the day in which he slammed the Turkish presence in the north of Cyprus.

“Erdogan – the occupier of northern Cyprus, whose army massacres women and children in Kurdish villages, inside and outside Turkey – should not preach to Israel,” he said.

He added that Netanyahu is “responsible for massacres of thousands of Palestinians, bombing children on beaches. Turkey will never stop exposing the truth.”

The Israeli leader defended his country’s army on Sunday, and called Erdogan “an antisemitic dictator who’s “obsessed with Israel.” Turkey’s army, he said, “massacres women and children in Kurdish villages,” and its government “is becoming more dictatorial day by day.”

I was just exposed to the daily trolling of the anti-Semitic dictator Erdogan.