Trump’s Syria ‘Victory’ Likely to Be Celebrated in Iran, Russia and Turkey 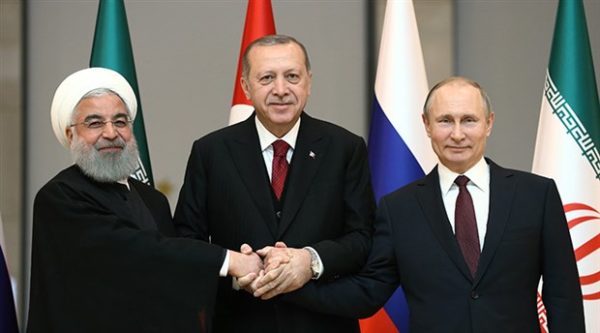 Trump’s Syria ‘Victory’ Likely to Be Celebrated in Iran, Russia and Turkey
Share:

Donald Trump campaigned on a vow to get U.S. troops out of intractable Middle East wars. He also promised to push back against rising Iranian power in the region.

With his abrupt order to pull troops out of Syria, Trump took a step toward keeping his first promise -– and triggered a firestorm in Washington as critics said he’s going soft on the second.

Trump declared that the U.S. had won the battle against Islamic State, saying that was “my only reason for being there.” But that decision leaves both Iran and Russia to wrap up their victory in the wider — and still ongoing — Syrian war.

“We have won against ISIS,” Trump said in a video posted to Twitter. “We’ve beaten them and we’ve beaten them badly, we’ve taken back the land, and now it’s time for our troops to come back home.”

The move stunned many who watched Trump build so much of his Middle East strategy around containing Iran. That included the tight alliance with Saudi Arabia — even after it botched the military campaign it led in Yemen and murdered a U.S. resident in Turkey — and the U.S. withdrawal from a 2015 nuclear deal over the protests of European allies.

Iran hawks were especially dismayed. Mark Dubowitz, the head of the Foundation for Defense of Democracies who has closely advised the Trump administration on Iran policy, called the troop withdrawal “a gift to Putin and to the mullahs in Tehran. And it would be a disastrous gift for the region.”

“Assad must go’’ was the U.S. mantra for much of the eight-year Syrian war. But with Iranian ground forces and Russian air power on his side, Syrian President Bashar al-Assad didn’t go anywhere. Instead, he gradually wrested back control of the country from various rebels and jihadists. The only large area of Syria still outside his hands is the northeast.

That’s where the bulk of Syria’s oil is -– and where thousands of U.S. soldiers are stationed. After Trump’s shock announcement, they’re now effectively in the departure lounge, waiting for a plane home — and leaving their local allies, mostly Kurds who Turkish forces in the region have in their crosshairs, in the lurch.

For the Assad-Russia-Iran alliance, the path to recapturing the whole country just opened up. For Turkish President Recep Tayyip Erdogan, too, a roadblock has been removed. Erdogan already grabbed a chunk of northwest Syria, driving out Kurdish fighters he views as terrorists, and now he’s threatening an imminent push into the northeast too. His early targets may include border cities like Kobani, where the Kurds took heavy casualties fighting off Islamic State with U.S. air support.

In Congress and foreign policy think-tanks, critics lined up to denounce Trump’s move. “An American withdrawal at this time would be a big win for ISIS, Iran, Bashar al-Assad of Syria, and Russia,’’ Republican Senator Lindsey Graham of South Carolina said on Twitter, voicing a widespread view.

On Wednesday, Trump signaled it’s only the first name on Graham’s list that counts.

Yet up through Tuesday, top U.S. officials had been indicating that American troops would stay to finish off Islamic State, guard against its return, and pressure Assad and Iran, which supplies Israel’s enemy Hezbollah through Syria.

The president’s abrupt reversal left key questions unanswered. It’s not clear how quickly the troops will leave, whether a small contingent might be left behind or whether airstrikes will continue. There’s still fighting in eastern Syria between Islamic State holdouts and the U.S.-led coalition, whose ground forces are mostly Kurds.

But the fight against Islamic State is only one strand of the civil war — and for the last couple of years, essentially a sideshow.

The jihadist group barely existed when the revolt against Assad broke out in 2011. It horrified the world by rapidly taking over swaths of Iraq and Syria and beheading captives on camera. But after years of pounding by the military might of America, Russia, Iran and Syria, it’s been reduced to pockets today. As Islamic State’s self-proclaimed caliphate shrank by 99 percent, the Assad-Russia-Iran alliance and the U.S.-led coalition raced each other to seize the territory it vacated.

In the wider Syrian conflict, Trump isn’t declaring victory or acknowledging defeat. He’s signaling that it’s not America’s fight. He hasn’t said what he thinks the fate of the Kurds, who the U.S. counted on for some of the toughest fighting, will be.

The president won a vote of support from former U.S. ambassador to Syria Robert Ford, who told Axios that “I’m not a big supporter of Donald Trump, but in this case he’s making the right call. The U.S. has no huge national security interests in northeastern Syria.”

Trump’s abrupt shift is a capstone to America’s haphazard approach to the Syrian conflict since it broke out.

President Barack Obama’s administration armed and funded rebel fighters – but many of them defected to, or were beaten by, the Islamist opposition. Obama threatened to attack Assad when he crossed a “red line” by using chemical weapons, then decided against it. Trump twice authorized strikes against Syrian targets in response to later allegations of chemical weapons use –- but they were largely symbolic, doing little damage to Assad’s military capacity.

Air power may allow the U.S to continue making cameo appearances on the Syrian battlefield, but its ability to influence events on the ground will be greatly limited.

Erdogan and his Russian and Iranian counterparts, Vladimir Putin and Hassan Rouhani, have emerged as the key arbiters of Syria’s fate. They agree that the Americans should get out of Syria, but there’s much they disagree on. Assad, for example, is strongly opposed to the Turkish army’s presence in his country, and Iran has backed him up.

Such divisions will likely sharpen as America disengages. Putin, who assembled the fragile alliance, may find it tough to keep it together as he’s forced to play the power broker among competing Middle East interests –- the role performed for decades by the U.S.

Initial Russian reaction was positive. Putin said Thursday that U.S. withdrawal is “the right thing to do.” The Russian Embassy in Washington said the decision “creates good prospects for a political solution.” Just not one the U.S. will have much say in.