In a move that risks emboldening Iran, Senate votes to end US support for Saudi war in Yemen 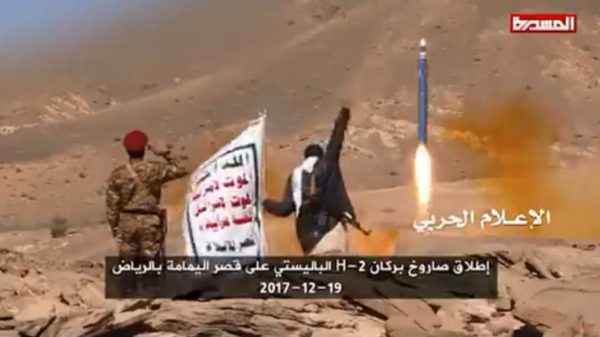 The Senate approved a resolution Thursday to end U.S. support for the Saudi-led war in Yemen, dealing a significant blow to President Trump amid heightened tensions over the death of U.S.-based Saudi journalist Jamal Khashoggi.

Senators voted 56-41 on the resolution, which would require the president to withdraw any troops in or “affecting” Yemen within 30 days unless they are fighting al Qaeda.
The resolution would still need to be passed by the House before it could be sent to Trump, who has threatened to veto it. The House on Wednesday narrowly approved a rule governing debate on the farm bill that included a provision that would prevent lawmakers from forcing a war powers vote this year.
Still, the Senate vote Thursday underscores the depth of frustration with Saudi Arabia on Capitol Hill, as well as the escalating gap between the White House and Congress on the relationship between the U.S. and the kingdom.
“I hope … we send a loud and powerful message by passing this resolution. That we’re going to bring peace to that country and that the United States Congress is going to reassert its constitutional authority to be the body that makes war not the president,” Sen. Bernie Sanders (I-Vt.), one of the sponsors of the resolution, told reporters.
It’s a dramatic U-turn from less than nine months ago when the chamber pigeonholed the same resolution, refusing to vote it out of committee and on to full Senate. At the time, 10 Democrats joined 45 Republicans in opposing it.
The resolution’s passage comes two days after Trump maintained that he would stand by the Saudi government and specifically Crown Prince Mohammed bin Salman, whom U.S. intelligence officials reportedly believe ordered Khashoggi’s killing inside the Saudi Consulate in Istanbul in early October.
A growing number of senators also believe the crown prince is responsible for the death of Khashoggi, who was a vocal critic of Saudi leadership and lived in Virginia while serving as a columnist for The Washington Post. The Senate passed a separate resolution Thursday afternoon specifically naming the crown prince as responsible for Khashoggi’s death.
Trump told Reuters on Tuesday that Riyadh has been “a very good ally” and “at this moment” sticking with Saudi Arabia means standing by the crown prince.
The Trump administration had led a lobbying effort to try to quash the Senate resolution withdrawing U.S. support for the military campaign in Yemen.
In addition to a veto threat, the administration sent Defense Secretary James Mattis and Secretary of State Mike Pompeo to brief senators and urge them to oppose the resolution. The House was expected to get the same briefing on Thursday.
And CIA Director Gina Haspel has met with a group of Senate and House lawmakers earlier this month, but she only appeared to solidify the belief among senators that the crown prince is responsible.
Sen. Lindsey Graham (R-S.C.) told reporters after the briefing that “there’s not a smoking gun, there’s a smoking saw” tying the crown prince to the death — a direct rebuke to Mattis’s claim that there isn’t a “smoking gun” linking the crown prince.
Backers of the Yemen resolution did lose some GOP support since the initial procedural vote late last month. Some Republicans, including Graham, say they voted initially to advance the resolution because of the message it sent to Saudi Arabia and not because of the substance of the resolution.
Outgoing Senate Foreign Relations Committee Chairman Bob Corker (R-Tenn.) said Wednesday that he couldn’t support the Yemen resolution but “I know that Lee-Sanders has the votes.”
Majority Leader Mitch McConnell (R-Ky.) urged opposition to the measure on Wednesday, while acknowledging members have “legitimate concerns” about Yemen and share “grave concerns” about Khashoggi’s death.
“[But] we also want to preserve the 70-year partnership between the United States and Saudi Arabia and we want to ensure it continues to serve American interests and stabilizes a dangerous and critical region,” McConnell said.
He added that the dynamic presents “challenging circumstances” but “the Sanders-Lee resolution is neither precise enough or prudent enough.”

Sen. Marco Rubio (R-Fla.), a member of the Foreign Relations Committee who also opposes the resolution, wrote in a Fox News op-ed Wednesday that while “the Saudis must answer for Khashoggi’s murder” the Sanders-Lee resolution “risks emboldening Iran and increasing the suffering of the Yemeni people.”

Corker, who spearheaded the resolution finding the crown prince responsible for Khashoggi’s death, had negotiated for days with Senate leadership on that resolution.
“Unanimously the United States Senate has said that Crown Prince Mohammed Bin Salman is responsible for the murder of Jamal Khashoggi. That is a strong statement. I think it speaks to the values that we hold dear. … I’m glad the Senate is speaking with once voice unanimously toward this end,” Corker said shortly after the vote Thursday.