Trump could go to jail after presidency, Schiff warns 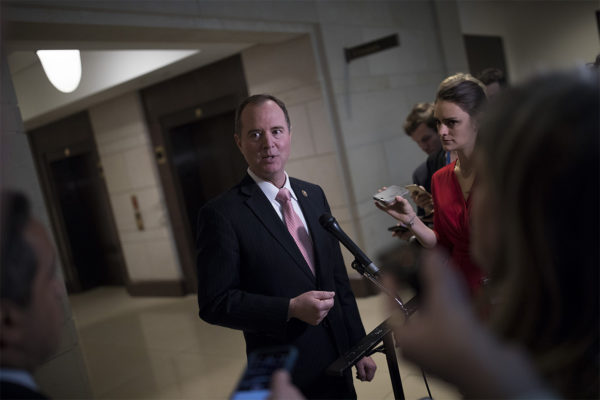 “The bigger pardon question may come down the road as the next president has to determine whether to pardon Donald Trump,” said Rep. Adam Schiff. | Aaron P. Bernstein/Getty Images
Share:

“My takeaway is there’s a very real prospect that on the day Donald Trump leaves office, the Justice Department may indict him. That he may be the first president in quite some time to face the real prospect of jail time,” Schiff, a former prosecutor and the incoming chairman of the House Intelligence Committee, said on “Face the Nation” on CBS.

The suggestion comes after federal prosecutors on Friday said Michael Cohen, Trump’s former personal attorney, was directed by Trump in 2016 to make hush money payments to two women who claimed affairs with Trump, who was then a candidate for the Oval Office. The statement came in a memo that suggested Cohen serve a “substantial” prison sentence of 51 to 63 months.

“We have been discussing the issue of pardons that the president may offer to people or dangle in front of people,” said Schiff. “The bigger pardon question may come down the road as the next president has to determine whether to pardon Donald Trump.”

The congressman added he thinks prosecutors made a “powerful case against that idea” in their sentencing memo.

“This was the argument for putting Michael Cohen in jail on these campaign violations. That argument I think was equally made with respect to Individual-1, the president of the United States,” according to Schiff.