Erdogan and Trump pile in on Macron, over Yellow Vests protests 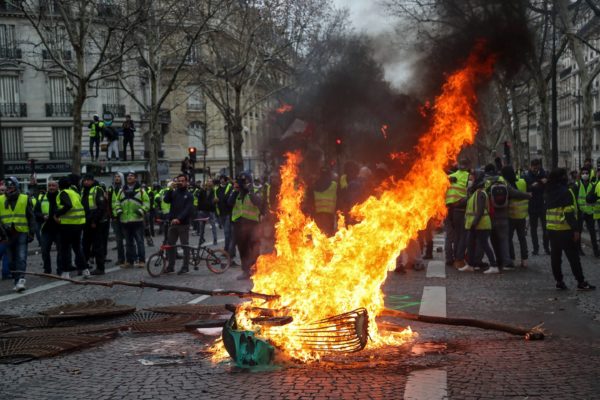 The fourth weekend of riotous protests in France as part of the Yellow Vests movement drew global attention, particularly from other world leaders.

“The Paris Agreement isn’t working out so well for Paris,” tweeted the US president. “Protests and riots all over France. People do not want to pay large sums of money, much to third world countries (that are questionably run), in order to maybe protect the environment. Chanting “We Want Trump!” Love France.” His claim that protesters were chanting ‘We want Trump’ has since been roundly debunked.

I am glad that my friend @EmmanuelMacron and the protestors in Paris have agreed with the conclusion I reached two years ago. The Paris Agreement is fatally flawed because it raises the price of energy for responsible countries while whitewashing some of the worst polluters….

Trump has previously spoken out about the Yellow Vest movement, saluting French protesters for agreeing “with the conclusion I reached two years ago” – namely that “the Paris Agreement is fatally flawed”.

While the Yellow Vest movement did spring up as a response to hiking fuel prices, it is not an anti-environmental movement. Saturday’s protest also saw a Climate March, which a number of Yellow Vests joined.

“Look at what policeman are doing to those who criticised our police!”

Meanwhile, Turkey’s president Recep Tayyip Erdogan denounced what he considered the “disproportionate violence” of the French authorities towards the protesters, adding that he was following the situation “with concern”.

“Chaos reigns in the streets of many European countries, starting with Paris. Television channels and newspapers are full of photos of burning cars, looted shops and the most violent police crackdowns on protesters,” he said.

Turkey is “against both the scenes of chaos brought about by protesters and the disproportionate violence that greeted them,” he said in a speech in Istanbul.

The demonstrations were widely covered by Turkish media, which also repeatedly broadcast the video of high school students forced to kneel with their hands behind their heads by police officers in Mantes-la-Jolie, a western suburb of Paris. “Ah! Look at what police officers are doing to those who criticised our police,” said Erdogan. He also declared that Europe had “failed in terms of democracy, human rights and freedom”.

Turkey has come under fire from European countries and human rights bodies for human rights violations and the erosion of the rule of law in the country.

Anti-government protesters faced off with riot police in Paris and other French cities on Saturday, hurling stones, torching cars and vandalising shops and restaurants in a fourth weekend of unrest that has shaken President Emmanuel Macron’s authority.

Le Drian said the French government does not comment on American politics and that this should work both ways.

“I say to Donald Trump, and the President of the Republic tells him too: we do not take part in American debates, let us live our life in our country,” he said.

Le Drian also said that most Americans disagreed with Trump over his decision to walk away from the 2015 Paris climate agreement.

In the past few months, Trump has published a series of tweets criticising Macron’s climate and defence policies, as well as Macron’s low approval rating.