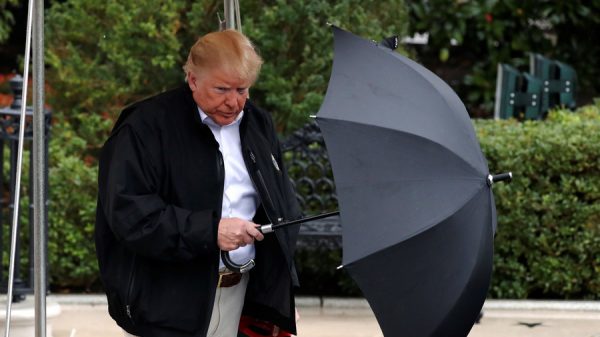 As if Donald Trump needed to give his haters more ammunition, the US President has now been accused of trampling on the memory of the US Marines killed in WWI after he canceled a memorial cemetery trip due to rain.
Share:

Nicholas Soames, a British politician and grandson of Winston Churchill, ripped President Trump on Saturday for canceling a cemetery visit in France due to bad weather.

“They died with their face to the foe and that pathetic inadequate @realDonaldTrump couldn’t even defy the weather to pay his respects to The Fallen,” Soames tweeted.

Soames, who is a member of Parliament for Mid Sussex, included a hashtag saying Trump is “not fit to represent his great country.”

Trump and first lady Melania Trump were scheduled to visit the Aisne-Marne American Cemetery and Memorial in northern France but had to cancel because of “scheduling and logistical difficulties caused by the weather,” the White House said in a statement.

The White House said that chief of staff John Kelly and Chairman of the Joint Chiefs of Staff Gen. Joseph Dunford planned to attend the ceremony Saturday.

I helped plan all of President Obama’s trips for 8 years. There is always a rain option. Always. https://t.co/exZNlONQOp

Trump and many members of his administration are in France this weekend to commemorate Armistice Day. Nov. 11 marks 100 years since the end of World War I.

Former top Obama aide Ben Rhodes also called out Trump for not visiting the cemetery, saying that under the previous White House there was “always a rain option. Always.”