Midnight on Sunday will mark a dividing line in the world of oil. Beyond that point, anyone unloading a tanker from Iran risks the full wrath of the U.S. government.

The Middle East’s third-biggest oil producer has already seen many buyers flee, with sales tumbling 37 percent since President Donald Trump announced that he’d reimpose sanctions. Once those restrictions formally kick in on Nov. 5, the overall supply disruption could become the biggest since Libya erupted in civil war at the start of the decade.

There are signs the impact will be mitigated, as some buyers look set to win partial exemptions while other producers — particularly Saudi Arabia — pump more to fill the gap. Still, there are doubts about their capacity to do so and the global nature of the oil market means nobody is fully insulated. Even U.S. drivers, whose engines haven’t seen a drop of Iranian crude for decades, have felt pain at the pump.

U.S. oil futures climbed to a four-year high near $77 a barrel last month on growing concerns there could be a shortage as sanctions bite deeper. While those fears have eased along with prices in recent weeks, significant risks remain.

“Iran’s oil exports are falling rapidly, and perhaps more and more in the weeks to come,” Fatih Birol, executive director at the International Energy Agency, said in a Bloomberg television interview.

The Trump administration has sent mixed signals, swerving between saying it’ll send Iranian oil exports to “zero” and dangling waivers that could allow some to keep buying.

While analysts don’t expect a complete halt, there’s a growing consensus that Trump’s tough stance means crude exports will plunge further than during a previous round of sanctions under Barack Obama’s administration in 2012. Back then they were sliced in half to 1 million barrels a day, according to the IEA, which advises industrialized countries on energy policy.

This time, 1.1 million barrels a day has already been cut from Iran’s shipments — a combination of crude and a light oil called condensate that was spared from curbs in 2012, according to data compiled by Bloomberg. The corresponding drop in production has been smaller as some of that output went into storage. That takes total exports to about 1.76 million barrels a day in October — more than is pumped from the North Sea.

“A large part of the impact has not happened yet,” said Mike Wittner, head of oil market research at Societe Generale SA. “Price-wise, there’s still some upward pressure to come — possibly a big wave of upward pressure. Things are going to tighten up.” 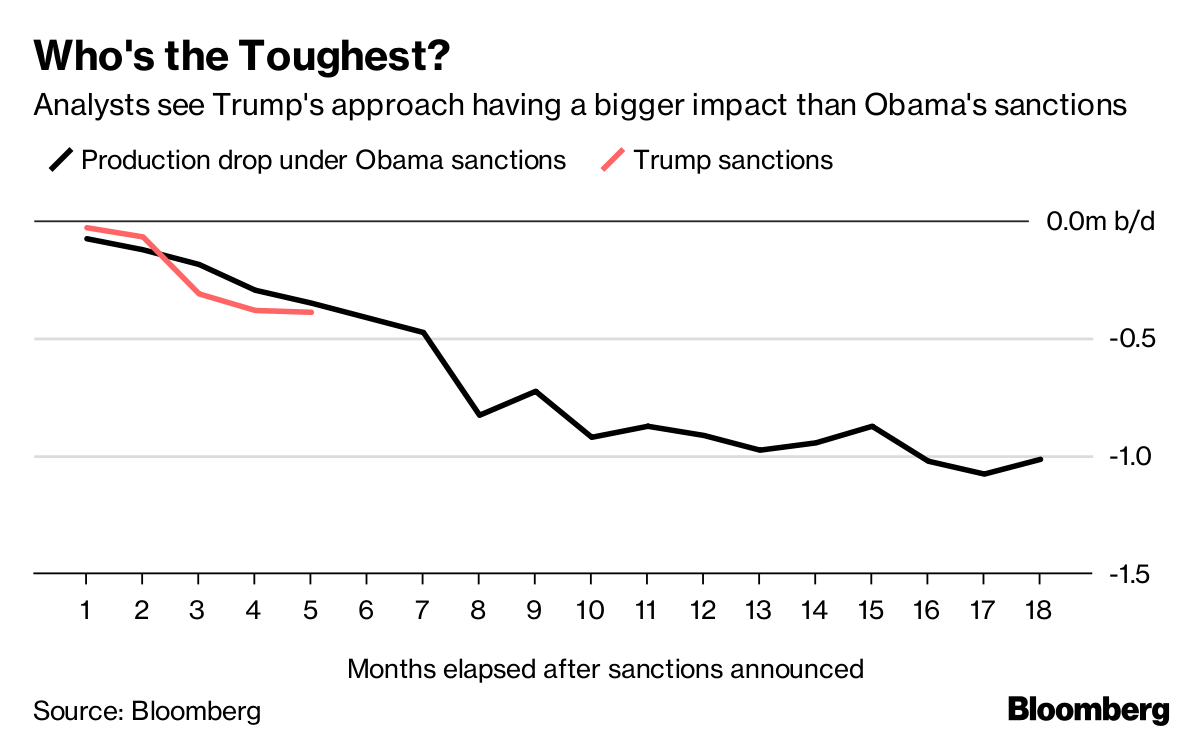 After Trump’s unilateral withdrawal from the nuclear deal with Iran, European governments vowed to do their utmost to preserve the agreement and find ways to continue trading. That hasn’t stopped the region’s intake of Iranian crude from wilting. Companies like Total SA and Royal Dutch Shell Plc have halted purchases because the risk of being frozen out of the U.S. financial system is simply too great.

In Asia, America’s closest allies Japan and South Korea have followed suit for now. The real test of how much oil will be removed from the market is the response of China and India, who together bought almost 1.1 million barrels a day last month, according to data compiled by Bloomberg.

China, the largest buyer of Iranian crude, continued imports during the sanctions imposed in 2012 and could in theory do the same again. While state-owned giants China National Petroleum Corp. and China Petroleum & Chemical Corp., commonly known as Sinopec, have been instructed to halt Iranian purchases, smaller companies with little or no exposure to U.S. markets could continue.

India, the second-largest buyer, has scaled back its intake while indicating it won’t cease completely. According to Asian officials with knowledge of the matter, the country agreed the outline of an exemption — known as a waiver — that would allow continued imports of some Iranian crude. No final decision has been made on whether waivers will be granted or the volumes permitted, the officials said.

South Korea has reached a similar agreement, the Asian officials said. Other countries are also seeking waivers, though U.S. officials warn such arrangements will be “few and far between.”

With gasoline prices still relatively high and midterm elections just days away, Trump has some incentive to soften his offensive. U.S. government officials acknowledge that waivers are being considered. For its part, Iran says it’s confident sales will hold above 1 million barrels a day.

“The U.S. will take its foot off the gas on sanctions and ease pressure in getting to zero right at the start in order to not cause a rise in oil prices in the lead up to elections,” said Robin Mills, head of Dubai-based consultant Qamar Energy. “Then they will pick up pressure towards the end of the year to cut Iran’s sales.”

The impact of the sanctions has already been cushioned by other oil producers, notably some of Iran’s counterparts in the Organization of Petroleum Exporting Countries. Saudi Arabia already increased production by 780,000 barrels a day since April, according to data compiled by Bloomberg.

The extent to which the kingdom can keep this up in the coming months depends on how many idle oil fields it’s able to tap. The IEA sees Saudi Arabia having about 1.3 million barrels a day of spare capacity. Others such as Russia, the United Arab Emirates and Iraq could potentially squeeze out a little more as well.

If the U.S. does follow through on its strongest threats, choking off Iranian supplies entirely, that spare capacity could be completely exhausted, leaving almost nothing left to cover unexpected disruptions in other trouble spots.

“If there’s almost no cushion left and something happens in Libya or Nigeria then you’re stuck,” said Societe Generale’s Wittner. “That’s where the market could see a big price reaction.”