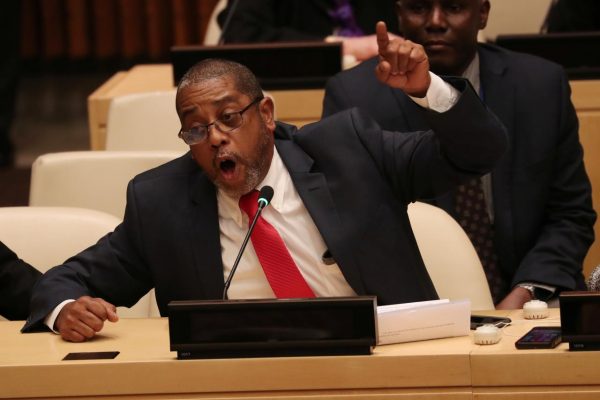 UNITED NATIONS- Protesting Cuban and Bolivian diplomats shouted, chanted and banged their hands on desks at the United Nations on Tuesday to drown out the launch of a U.S. campaign on the plight of Cuban political prisoners.

U.S. envoy to the U.N. Economic and Social Council (ECOSOC) Kelley Currie persisted, delivering her remarks in the ECOSOC chamber, followed by several other speakers, including Secretary General of the Organization of American States Luis Almagro.

“I have never in my life seen diplomats behave the way that the Cuban delegation did today. It was really shocking and disturbing,” Currie told reporters.

“You can understand very well why people feel afraid to speak their minds … with this kind of government, this kind of thuggish behavior,” she said. “It has no place here in the United Nations.”

During the meeting, the protesting diplomats chanted “Cuba si, bloqueo no (Cuba yes, blockade no)!” in protest against a decades-old U.S. trade embargo on the Caribbean island nation that President Donald Trump has tightened.

Cuban U.N. Ambassador Anayansi Rodríguez Camejo protested to U.N. Secretary-General Antonio Guterres ahead of the event, and on Tuesday she described the event as a “political comedy.”

“Cuba is proud of its human rights record, which denies any manipulation against it,” she told reporters. “On the contrary, the U.S. lacks the morals to give lessons, much less in this matter.”

The United States said in a statement that is  its estimated there are 130 political prisoners held by the Cuban government. The campaign it launched on Tuesday was called “Jailed for What?”

“The imprisonment of children would have rightly justified the name ‘Jailed for What?’” said Camejo, referring to the U.S. policy of separating and detaining children and parents who have entered the United States illegally. “This is a shame for the United States government.”

The Cuban government maintains it does not have any political prisoners, and characterizes Cuba’s small but vocal dissident community as mercenaries paid by U.S. interests to destabilize the government.

ECOSOC is responsible for coordinating the economic, social and related work of 15 U.N. specialized agencies, their commissions and five regional commissioners.