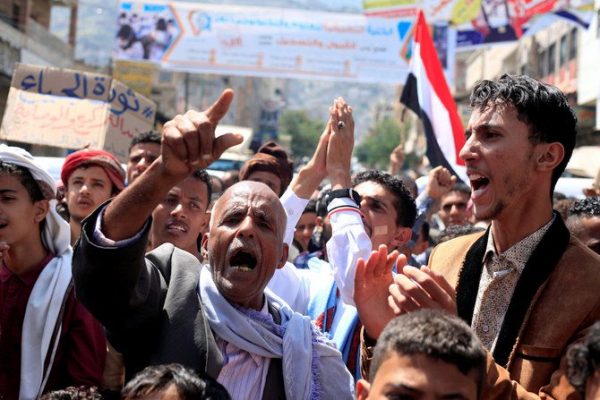 People demonstrate to denounce the deterioration of Yemen’s economy and the devaluation of the local currency in Taiz, Yemen October 6, 2018. REUTERS/Anees Mahyoub
Share:
Yemen’s Houthi group arrested a number of demonstrators in Sanaa on Saturday over plunging living standards, as soaring prices put basic commodities out of reach for many people amid a humanitarian crisis and war with neighboring countries.

The Iran-aligned Houthis took control of the capital Sanaa in 2014, ousting the internationally recognised government of Abd-Rabbu Mansour Hadi. A Saudi-led, U.S.-backed international military coalition intervened in 2015 to restore it.

The students were released at the end of the day after signing a pledge not to take part in demonstrations again, one of them said, asking not to be identified for fear of retribution. She said female Houthi supporters “attacked us with electric shock batons and clubs, supported by armed men”.

“They beat me until I fell to the ground and I received an electric shock in the back when I stood up again. I wasn’t able to move when they took me to the police station,” she said.

The Houthi-controlled Saba news agency described the demonstrators as “mercenaries” looking to stir up public anger.

“Security services in the capital detained a number of mercenaries tasked by the aggressors to plant rumours and disturb public peace,” Saba reported.

Both sides of the Yemen conflict have been accused of serious human rights violations.

Some staple goods have become too expensive for many Yemenis, and the central bank has struggled to pay the public-sector salaries on which many depend as foreign exchange reserves dwindle.

Separately, Bahrain, part of the Saudi-led coalition, said the Houthis had shelled a camp for displaced people near the Red Sea port city of Hodeidah on Friday, “killing a woman and injuring a large number of civilians”, according to a statement from its foreign ministry in Manama.

Houthi representatives have not yet responded to that claim.

Yemeni forces backed by the coalition launched a major offensive in Hodeidah in June, but suspended it after several weeks to allow the possibility for U.N.-brokered peace talks. Fighting resumed last month, however, after the Houthis failed to attend the talks.
REUTERS