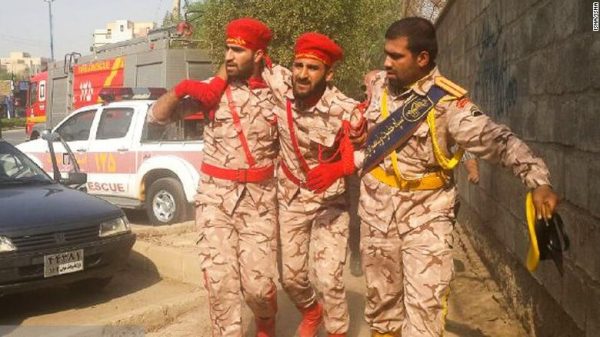 At least 25 people were killed and 60 others injured in an attack on a military parade in Iran’s southwestern city of Ahvaz on Saturday
Share:

A spokesman for the Islamic State said in an undated recording released on Wednesday that an attack on Iranian Revolutionary Guards, which the group claimed on Saturday, would not be the last.

“The Ahvaz attack will not be the last, God willing,” Abi al-Hassan al-Muhajer said in the recording carried by the group’s Al Furqan network on Telegram.

Gunmen killed 25 people at a military parade in southwestern Iran on Saturday, almost half of them Revolutionary Guards, in one of the worst attacks against the most powerful force of the Islamic Republic. .

“The sons of the caliphate have proven just how fragile the security of the Magi State (Iran) is,” he said.

Reuters could not independently verify the audio recording.

Ahvaz National Resistance, an Iranian ethnic Arab opposition movement which seeks a separate state in oil-rich Khuzestan province, and Islamic State have both claimed responsibility for the attack. The latter’s news agency AMAQ released a video of three men in a vehicle who it said were on their way to carry out the attack.

Kurds who joined the Kurdistan Freedom Party (PAK)  are from Iran, but fled the Islamic Republic’s repression to find refuge in the autonomous Kurdistan Regional Government areas of northern Iraq.

The small group of dedicated fighters in the PAK played a key role in fighting ISIS at several frontlines held by Kurdish forces between 2014 and 2017. Now some of those veterans have been kidnapped, poisoned  and killed by Iran’s regime, members say.

US President Donald  Trump has claimed that Iran is the world’s “leading state sponsor of terror.

Iran’s ally Syrian President Bashar Assad has reportedly  also been  cooperating with Islamic State  for several years  The Syrian regime was  buying cheap oil from the organization – pumped from Syrian oilfields that Islamic State  controls  and selling it to its citizens.

Assad  also cooperated with ISIS   militarily  in the battles against other rebel militias, especially the coalition known as Jaish al-Fatah (“The Army of Conquest”), which includes the Al-Qaida-linked Nusra Front.