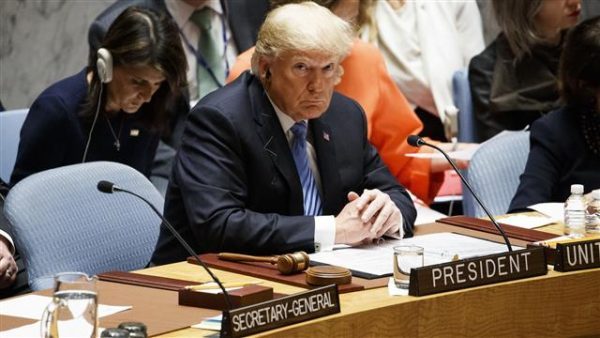 U.S. President Donald Trump accused China of seeking to meddle in the Nov. 6 U.S. congressional elections on Wednesday, saying Beijing did not want his Republican Party to do well because of his pugnacious stance on trade.

“China has been attempting to interfere in our upcoming 2018 election, coming up in November. Against my administration,” Trump told a U.N. Security Council meeting whose ostensible subject was nonproliferation of weapons of mass destruction.

Trump, chairing the Council for the first time since becoming U.S. president, did not provide any evidence for his allegation, which China immediately rejected during the same meeting.

“We did not and will not interfere in any country’s domestic affairs. We refuse to accept any unwarranted accusations against China,” the Chinese government’s top diplomat Wang Yi told the Council.

Trump also used the session to defend the U.S. withdrawal in May from a 2015 international nuclear deal with Iran, hint at progress in U.S. efforts to curb North Korea’s nuclear program, and to criticize Iran and Russia for supporting Syrian President Bashar al-Assad in the country’s war, now in its eighth year.

“The Syrian regime’s butchery is enabled by Russia and Iran,” Trump said.

Trump’s focus on China and his allegation of election meddling came as a surprise during a formal meeting around the Security Council’s horseshoe table that was expected to concentrate on the spread of nuclear, chemical and biological weapons.

“They do not want me or us to win because I am the first president ever to challenge China on trade and we are winning on trade, we are winning at every level. We don’t want them to meddle or interfere in our upcoming election,” said Trump, who is attending the U.N.’s annual gathering of world leaders.

Trump himself is not up for re-election until 2020 but November’s voting will decide whether his Republican Party can keep control of the U.S. House of Representatives and the Senate. Some opinion polls show that the Democratic Party could make a strong showing, notably in the House.

The United States and China are embroiled in a trade war, sparked by Trump’s accusations that China has long sought to steal U.S. intellectual property, limit access to its own market and unfairly subsidize state-owned companies.

During his roughly 10-minute speech, Trump made no reference to U.S. allegations that Russia meddled in the 2016 U.S. election that brought him to power. The allegations have dogged his presidency and have given rise to an investigation by U.S. Special Counsel Robert Mueller into potential collusion between Moscow and the Trump campaign, which Trump rejects.

In July at a summit in Helsinki, Trump accepted Russian President Vladimir Putin’s denials his government ran an operation to hack Democratic Party computers and spread disinformation on social media. Trump frequently describes investigations into the interference as a political witch hunt.

On the war in Syria, Trump noted Washington had twice launched airstrikes against the Assad government for twice using chemical weapons against civilians.

He also used the session to defend his May 8 decision to abandon the Iran nuclear deal under which Tehran limited its nuclear program in return for the easing of U.S., European and international economic sanctions.

The core U.S. sanctions that seek to choke off Iran’s oil exports, the life blood of its economy, will resume in early November and Trump promised that “after that the United States will pursue additional sanctions, tougher than ever before, to counter the entire range of Iran’s malign behavior.”

Trump asked the Security Council to work with the United States to “ensure the Iranian regime changes its behavior and never acquires a nuclear bomb.”

China’s Wang encouraged Iran to keep its commitments under the nuclear deal and, in an apparent riposte to Trump, said “at the same time, the legitimate right of all countries to normal economic relations and trade with Iran should be respected.”

While Iran has made clear that it has little interest in opening talks with the United States since Washington’s abrogation of the accord, North Korean leader Kim Jong Un met with Trump in June about his country’s nuclear program.

U.S. Secretary of State Mike Pompeo will visit Pyongyang next month to discuss North Korean denuclearization efforts ahead of a planned second summit between Kim and Trump, the U.S. State Department said on Wednesday.

“I think we will make a deal, but unfortunately to ensure this progress continues we must enforce existing U.N. Security Council resolutions until denuclearization occurs,” Trump said before Pompeo’s trip was announced.

Trump told the Council some countries were violating the U.N. sanctions, but he did not name them. The U.S. ambassador to the United Nations accused Russia this month of “cheating” on U.N. sanctions on North Korea.

We at Ya Libnan encourage all readers to share their views on the posts. We are committed to maintaining a lively but civil forum for discussion, so we ask you to avoid personal attacks, and please keep your comments relevant and respectful.
Share: