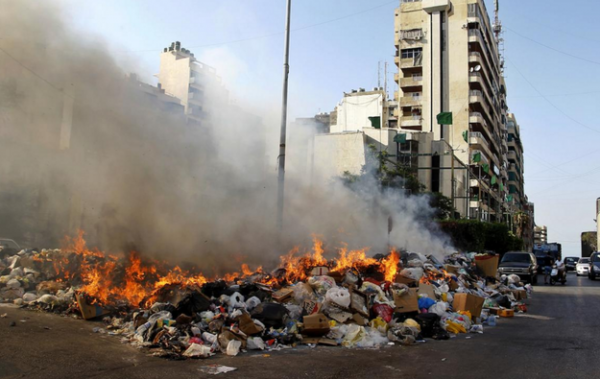 The draft law allows the incineration of trash which some concerned would lead to environmental pollution and harm human health, according to independent online newspaper Elnashra.

“I am sorry to hear that some members of parliament believe that Lebanon is not polluted,” said Paula Yacoubian, a parliament member who objects the law.

Osama Saad, another parliament member, said earlier this morning during a protest over the law that the trash issue in Lebanon should be solved in a different way in a bid to minimize negative repercussions on the health of the Lebanese.

The national bloc announced on social media during the parliament session that it will not vote in favor of the law.

Lebanon has experienced a severe trash crisis that left piles of rubbish on beaches, in mountain forests and river beds across the country, after the country’s largest landfill at Naameh, just south of Beirut, was closed in July, 2015.

In a bid to solve the issue, Lebanese decision-makers decided to burn the waste while establishing two landfills to ease the crisis.

According to IndyAct, a non-governmental organization (NGO), waste incinerators are globally known as the main source of dioxins and other toxic pollutants that cause cancer