Iran’s Rouhani blames US after attack on military parade 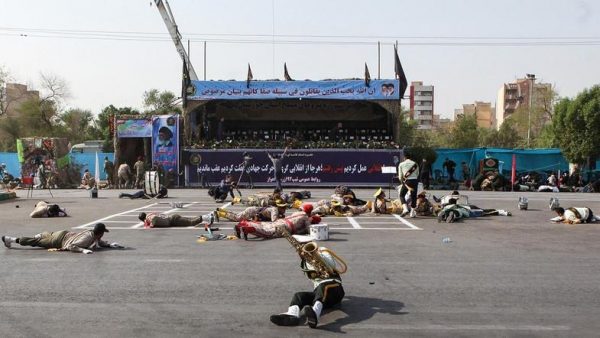 This picture taken on September 22, 2018 in the southwestern Iranian city of Ahwaz shows injured soldiers lying on the ground at the scene of an attack on a military parade. (AFP)
Share:

Iran’s president on Sunday accused an unnamed U.S.-allied country in the Persian Gulf of being behind a terror attack on a military parade that killed 25 people and wounded 60, further raising regional tensions.

The Iranian moves, as well as promises of revenge by Iran’s elite Revolutionary Guard, come as the country already faces turmoil in the wake of the American withdraw from Tehran’s nuclear deal with world powers. The attack in Ahvaz, which saw women and children flee with uniformed soldiers bloodied, has further shaken the country.

Rouhani’s remarks could refer to Saudi Arabia, the United Arab Emirates or Bahrain — close U.S. military allies that view Iran as a regional menace over its support for militant groups across the Middle East.

“All of those small mercenary countries that we see in this region are backed by America. It is Americans who instigate them and provide them with necessary means to commit these crimes,” Rouhani said before leaving for the U.N. General Assembly in New York.

Iran meanwhile summoned diplomats from Britain, Denmark and the Netherlands early Sunday for allegedly harboring “members of the terrorist group” that launched the attack. Danish Foreign Minister Anders Samuelsen condemned the attack and stressed that there would be “consequences” if it turns out that those responsible have connections to Denmark.

The ministry later summoned the UAE’s envoy as well over what it called the “irresponsible and insulting statements” of an Emirati adviser, according to the semi-official ISNA news agency. The UAE did not immediately acknowledge the summons.

Saturday’s attack, in which militants disguised as soldiers opened fire on an annual Iranian military parade in Ahvaz, was the deadliest attack in the country in nearly a decade. Women and children scattered along with once-marching Revolutionary Guard soldiers as heavy gunfire rang out, the chaos captured live on state television.

The region’s Arab separatists ( Ahwazi Arabs) , once only known for nighttime attacks on unguarded oil pipelines, claimed responsibility for the assault, and Iranian officials appeared to believe the claim. The separatists accuse Iran’s Persian-dominated government of discriminating against its ethnic Arab minority. Khuzestan province also has seen recent protests over Iran’s nationwide drought, as well as economic protests.

The attack killed at least 25 people and wounded 60, according to the state-run IRNA news agency. It said gunmen wore military uniforms and targeted a riser where military and police commanders were sitting. State TV hours later reported that all four gunmen had been killed.

At least eight of the dead served in the Revolutionary Guard, an elite paramilitary unit that answers only to Iran’s supreme leader, according to the semi-official Tasnim news agency. The Guard responded to the attack on Sunday, warning it would seek “deadly and unforgiving revenge in the near future.”

Tensions have been on the rise in Iran since the Trump administration pulled out of the 2015 nuclear accord with Iran in May and began restoring sanctions that were eased under the deal. It also has steadily ramped up pressure on Iran to try to get it to stop what Washington calls its “malign activities” in the region.

The U.S. government nevertheless strongly condemned Saturday’s attack and expressed its sympathy, saying it “condemns all acts of terrorism and the loss of any innocent lives.”

The Islamic State group also claimed responsibility for the attack in a message on its Amaaq news agency, but provided no evidence it carried out the assault. They also initially wrongly said the Ahvaz attack targeted Rouhani, who was in Tehran. The militants have made a string of false claims in the wake of major defeats in Iraq and Syria.

On Sunday, IS militants posted a video online of three men, two of whom who spoke in Arabic extolling the benefits of martyrdom. A third who spoke in Farsi said they wanted to attack the Guard. The video included no time stamps, nor any specific references to the Ahvaz attack.

An overnight impromptu candle-light vigil in Ahvaz honored the dead and wounded. Among the dead is 4-year-old Mohammad Taha, who was captured by a photographer being carried away from the attack by a Guardsman in full dress uniform and sash. The photograph, showing the boy bloodied and helpless, shocked Iran.

A doctor interviewed on state television said Mohammad had been up the night before marking Ashoura, a commemoration of the death of the Prophet Muhammad’s grandson Hussein, one of Shiite Islam’s most beloved saints. Mourners wear black in honor of his 7th century death in the Battle of Karbala in present-day Iraq.

“He was wearing a black shirt when he was martyred,” a doctor said, standing next to the boy’s tiny corpse, now wrapped in a blue body bag.

According to Amnesty International, Ahwazi Arabs face discrimination by the authorities concerning politics, employment and cultural rights . There has also been many arrests of Ahwazi Arabs who have converted to Sunni Islam, which is considered a crime in Iran according to the British daily newspaper The Guardian. meanwhile, according to Islamic Republic of Iran, there is not such crime/penalty in its law for converting to Sunni.

The rise in conversion to Sunni Islam is partly a result of anti-Arab racism, the perceived crackdown on the Arab identity of the region and the view that Sunni Islam is closer to the Arab roots of the Ahwazi Arabs. According to the International Campaign for Sunni Prisoners in Iran (ICSPI), the crackdown is due to the Iranian government’s alarm at “the rise of Sunni Islam among the Ahwazi Arabs in the traditionally Shia-majority Khuzestan province. As a result of these conversions, Sunni Arabs across the Middle East have increasingly shown support for the Ahwazi cause.