Lebanese farmers Wednesday called on the government again to assist them in exporting their produce to the Gulf region through Nassib Border Crossing when the crossing between Syria and Jordan is re-opened.

“We want the government to support us in exporting our products by land to the Gulf region through the Nassib border after the big losses we have incurred since the closure of this crossing point three years ago,” Ibrahim Tarshishi, president of the Bekaa Farmers Association, told Xinhua.

Jordan closed its border crossing with Syria in April 2015, following heavy clashes between rebel fighters, who encircled the Nassib crossing, and Syrian government forces near the area.

As the only functioning crossing between Jordan and Syria, Nassib is vital for the transport of goods from Lebanon and Syria to Jordan and Gulf states.

Lebanon’s agricultural exports suffered heavily following the closure of the Nassib border, witnessing a drop of more than 35 percent. 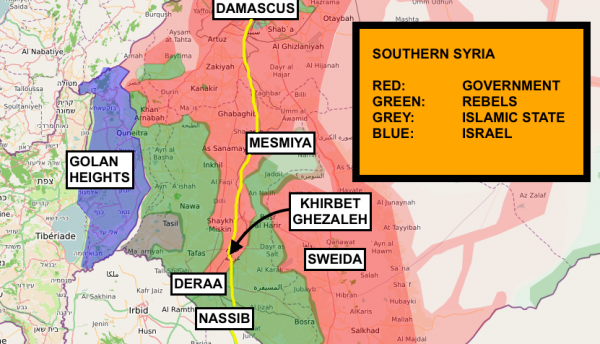 The ongoing talks between Syrian and Jordanian officials with regard to the re-opening of the border have raised the hopes of Lebanese farmers that their losses in the previous years could be offset.

However, the Syrian authorities said earlier that Lebanon must send an official request to Syria for using the Nassib Border Crossing to send its exports to the rest of the world.

Meanwhile, Lebanese Prime Minister-designate Saad Hariri has officially refused to restore ties with the regime of Syrian President Bashar Assad or visit Syria under any circumstances even if it would cost him his premiership.

Nonetheless, Tarshishi said this issue can be addressed.

He said Abbas Ibrahim, general director of the Lebanese General Security, has promised to solve this problem by discussing it with his Syrian counterparts during his visit to the neighboring country next week.

“Jordan is also very positive about allowing Lebanese products to be exported through this border,” Tarshishi added.

The Lebanese association chief highlighted the closure of Nassib border as the most serious challenge facing agriculture in Lebanon.

“We lost around 1.2 billion U.S. dollars caused by the drop in our agricultural and industrial exports in 2017 after the closure of the Nassib  border,” he lamented.

The year 2018 is likely to witness the same amount of losses, Tarshishi added.

Antoine Howayek, head of Lebanese Farmers Association, agreed that no positive developments will take place in the agricultural sector if the Nassib border remains closed.

Lebanese farmers were forced to resort to the maritime route to export their produce after the border closure, Howayek noted.

But “the problem with maritime export is that it costs about double the price of land export, while the government subsidizes only less than half of the cost,” he explained.

Howayek suggested the government purchase vessels to help export Lebanon’s agricultural products to the rest of the world.

The importers in Lebanon could pay for the transport fees after the vessels carrying the agricultural products reach their destination, get loaded and return with the imports, he explained.

Unfortunately, mismanagement in the sector rules out the possibility, he noted.