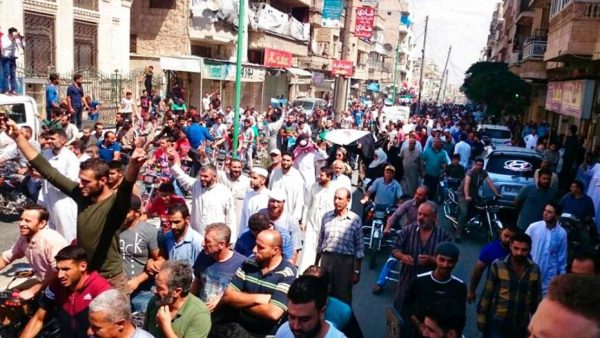 Protesters holding Syrian revolution flags and chanting, in Maaret al-Numan, a town in Idlib province, Syria, Friday, Sept 7, 2018; The Friday rallies came as Presidents of Iran, Turkey and Russia are meeting in Tehran to discuss the war in Syria
Share:

More than 100 U.S. Marines launched an air assault in the southern Syrian desert backed by artillery fire to send a “strong message” to Russia not to send their forces inside a restricted area near an American military outpost, two U.S. defense officials have told Fox News.

The show of forces comes as the leaders of Iran, Russia and Turkey are meeting Friday in Tehran to hammer out their next steps in the seven-year Syrian civil war ahead of an expected offensive led by Syrian President Bashar al-Assad’s forces into the country’s northwest Idlib Province.

On two separate occasions this month (Sept. 1 and Sept. 6), the Russian military warned its American counterparts of its intention to conduct a military operation in southern Syria near the At Tanf garrison where U.S. special operations forces are located.

Twice the U.S. military has told the Russians to back off.

“The United States does not seek to fight the Russians, the government of Syria or any groups that may be providing support  to Syria in the Syrian civil war,” Navy Capt. William Urban, a spokesman for U.S. Central Command, said in a statement.

“The U.S. does not require any assistance in our efforts to destroy ISIS.”

The area is home to three million people, including hundreds of thousands of civilians living among rebel fighters including thousands with ties to al-Qaeda.

The Trump administration has warned Syria, Russia and Iran not to kick-start the offensive over fear of civilian casualties leading to continued bloodshed in a civil war that has lasted seven years.

Earlier this week, President Trump tweeted: “President Bashar al-Assad of Syria must not recklessly attack Idlib Province. The Russians and Iranians would be making a grave humanitarian mistake to take part in this potential human tragedy.”Hundreds of thousands of people could be killed. Don’t let that happen!”

The warning appeared to have been ignored after Russian jets began bombarding Idlib.

“We consider any assault on Idlib to be a dangerous escalation of the conflict in Syria,” said U.S. ambassador to the United Nations Nikki Haley Friday in New York. “Airstrikes by Russia and the regime have already begun against civilian areas.

“The atrocities committed by Assad will be a permanent stain on history  and a black mark for this council which was blocked over and over by Russia from taking action to help,” she added.

In a statement describing the air-assault that took place Friday night in Syria, a spokesman for the U.S. military’s Central Command, responsible for all American forces in the Middle East, said it was an effort to “demonstrate the capability to deploy rapidly, assault a target with integrated air and ground forces, and conduct a rapid exfiltration anywhere in the Operation Inherent Resolve combined joint operations area.”

“Exercises like this bolster our defeat-ISIS capabilities and ensure we are ready to respond to any threat to our forces,” said Navy Capt. Bill Urban.

A threat some took as going beyond ISIS but to Moscow.

“The Russians agreed to a [34 mile] ‘deconfliction zone’ around the At Tanf garrison to avoid accidental conflict between our forces, and to remain professionally engaged through de-confliction channels. We expect the Russians to abide by this agreement,” Urban said.

The Russian government has long called for the 2,000 U.S. military troops to leave Syria.

The Russian provocations were not limited to Syria. Friday, the North American Aerospace Defense Command said a pair of fifth generation U.S. F-22 stealth jet fighters from Alaska intercepted a pair of long-range nuclear-capable Tu-95 “Bear” bombers last Saturday flying south of the Aleutian Islands.  It was the first known flight of Russian bombers near the United States since May.