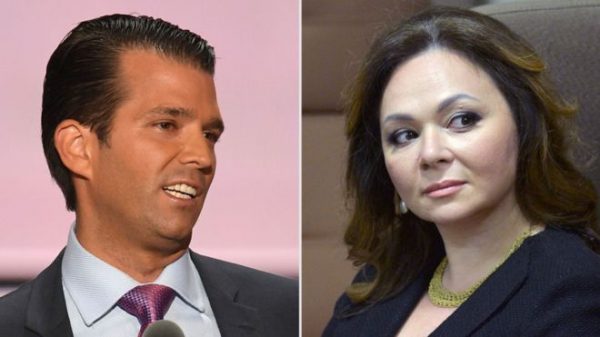 US President Donald Trump has finally admitted that his son met a Russian lawyer in June 2016 “to get information on an opponent”, but argues it was legal.

It is his most direct statement so far on the reason for Donald Trump Jr’s meeting with Kremlin-linked lawyer Natalia Veselnitskaya at Trump Tower.

Special Counsel Robert Mueller is investigating US intelligence findings that Russians conspired to sway the election in Mr Trump’s favour.

He has called the ongoing investigations in the US “the greatest political witch hunt in history”.

What did President Trump say?

On Sunday, US media including the Washington Post, CNN and AP reported that Mr Trump was worried Donald Trump Jr could be in legal trouble because of the 9 June 2016 meeting with Ms Veselnitskaya in New York. They cited multiple unnamed sources.

Mr Trump tweeted: “Fake News reporting, a complete fabrication, that I am concerned about the meeting my wonderful son, Donald, had in Trump Tower.

“This was a meeting to get information on an opponent, totally legal and done all the time in politics – and it went nowhere.

Mr Trump’s latest tweet appears to contradict a previous statement from the Trump camp about the meeting.

When the meeting was first reported by the New York Times, Donald Trump Jr said in a statement that he and Ms Veselnitskaya had mostly discussed a suspended programme for Americans to adopt Russian children.

However, he subsequently admitted he had agreed to the meeting after being told he would be offered information that would prove detrimental to Mrs Clinton. He also released the email exchange that brought about the meeting.

US media then reported that the US president had been involved in the initial statement his son issued on the meeting.

This was initially denied by Mr Trump’s team, but his lawyers later confirmed that he had in fact dictated his son’s statement.

US commentators have argued that Mr Trump’s new admission that the meeting was to gain information about Mrs Clinton shows that the earlier statement was misleading.

Why is the Trump Tower meeting controversial?

It is common for US politicians to research their opponents during a campaign.

However, legal experts say that Mr Trump Jr could fall foul of campaign finance laws, which prohibit accepting anything of value from a foreign government or foreign national.

His apparently enthusiastic response to the offer of information about Mrs Clinton could also breach conspiracy laws.

The Trump team has argued that Mr Trump Jr ultimately did not receive any damaging information about Mrs Clinton at the meeting.

One of Mr Trump’s lawyers, Jay Sekulow, said on Sunday that the meeting had not broken any laws.

“The question is what law, statute or rule or regulation’s been violated? Nobody’s pointed to one,” Mr Sekulow told ABC News.