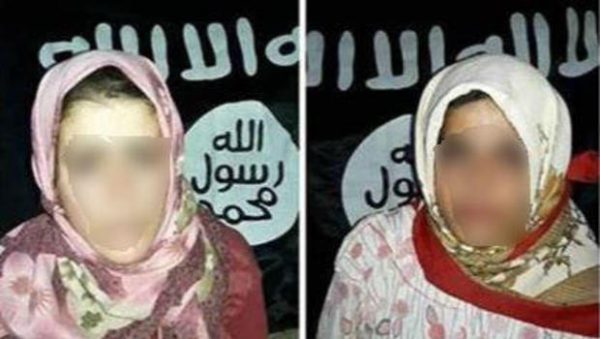 Two examples of images distributed on social media, purportedly of Druze women held captive by ISIS militants after an attack on the village of Al-Shobki in Syria’s Sweida province on July 26, 2018. Reports say social ISIS sent photos of the kidnapped women and girls to their families via WhatsApp, making demands for their release. CBS News has obscured the women’s faces as their identities cannot be confirmed.
Share:
SIS kidnapped dozens of Druze women and children when it attacked their village last week in Syria’s Sweida, it has been revealed.

Sweida, which is mainly government-held and populated with members of Syria’s Druze minority, had been largely insulated from the conflict raging in the rest of the country since 2011.

But on Wednesday, a string of suicide blasts and shootings claimed by ISIS left more than 250 people dead in the provincial capital and nearby villages, most of them civilians.

During the attack, ISIS jihadists also abducted several dozen women and children from one village, according to the Syrian Observatory for Human Rights and Sweida residents.

The Britain-based Observatory said 36 Druze women and children were abducted, but that four women had since managed to escape while another two had died.

That left 14 women and 16 children in ISIS captivity, said Observatory head Rami Abdel Rahman. Another 17 men were unaccounted for but it was unclear if they were also kidnapped.

ISIS has not claimed the kidnappings and no details on them could be found on its propaganda channels.
DAILY MAIL