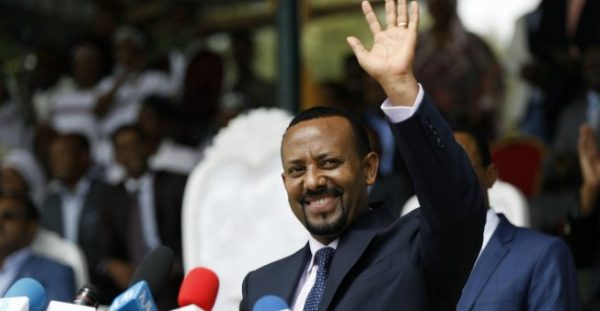 AFP | Ethiopian Prime Minister Abiy Ahmed at a political rally on April 11. In his first months in office, Abiy has waged a charm offensive, spreading hope for political and economic reform.
Share:

Earlier this year, Ethiopia looked on the brink of widespread unrest as protests broke out against the government and abuses by security forces. But after just four months in office, Prime Minister Abiy Ahmed is steering the ship in a new direction.

The new prime minister made an unprecedented three-day visit to Ethiopian diaspora in the United States starting on July 27. Although he met with Vice President Mike Pence, his primary aim during the visit was to sell his reform projects to Ethiopians. The US is home to the biggest population of Ethiopians outside of Ethiopia — over 300,000 live in the Washington metropolitan area alone.

In a speech in Washington, he called for members of the diaspora to support his reforms, invest in the country, and return home.

While in the US, Abiy also sought to reconcile the 27-year schism in the Ethiopian Orthodox Church. The church split in 1991 over the naming of a new patriarch after the rebel Ethiopian People’s Revolutionary Democratic Front (EPDRF) toppled the Derg military junta from power. The former patriarch went into exile in the United States, effectively splitting the church. Abiy helped accelerate the peace talks, overseeing a reunification ceremony in Washington on Friday.

The visit to the US is just the latest episode in the new prime minister’s whirlwind efforts to reform Africa’s second-largest country in terms of population.

Last month, he announced that Ethiopia would honour an international ruling requiring it to cede land back to neighbouring Eritrea. This set in motion a historic “declaration of peace and cooperation” that ended a decades-long border conflict between the two countries.

He closed prisons, released prisoners, and admitted that the government had tortured citizens. He lifted the state of emergency and bans on opposition media.

The first member of the Oromo ethnic group to lead the country, Abiy also announced profound reforms to the country’s political system, hoping to break down the power monopoly held by a small minority of Ethiopia’s more than 80 ethnic groups.

He is determined to open up and revitalise the Ethiopian economy. He has made moves towards privatising key industries, saying the government would sell stakes in two of the biggest state-run companies, telecom company Ethiotel and Ethiopian Airlines.

“All these reforms are in progress. And like the détente with Eritrea, they are big and surprising changes,” Horn of Africa expert Gérard Prunier told FRANCE 24. “All this is a miracle. We owe these changes to an intelligent man named Abiy Ahmed.”

Pure product of the system

Just a few months ago, the country’s new leader was little known to the general public. But he is no stranger to the political establishment.

As a lieutenant-colonel, he helped reform the army and created in 2009 the Information Network Security Agency, a surveillance body that he would direct until 2012. From 2015-2016 he served as Minister for Science and Technology.

Born in 1976 to an Oromo Muslim father and an Amhara Christian Orthodox mother, he was 15 when the guerilla group the Tigrayan People’s Liberation Front led by Meles Zenawi toppled dictator Mengistu Haile Mariam. Abiy was educated in the US and Great Britain, and joined the army at 15.

“When Meles Zenawi took power, he put in place an administrative system based on ethnic federalism. He created a bureaucracy dominated by Tigrayans (who make up 6% of the population), Oromos and Amharas. It was on this basis that Abiy Ahmed joined the army. He is an intelligent man who was able to climb the ranks. He knows a lot of people,” said Prunier.

Abiy caught the eye of Hailemariam Desalegn, the prime minister who succeeded Meles Zenawi when he died in 2012 after 20 years in power. But Hailemariam wasn’t able to execute political and economic reforms. “Hailemariam Desalegn is from a very small ethnic group, the Welaytas,” explained Prunier. “As a member of a minority group, it was clear that he had trouble imposing his ideas on the ruling coalition, the Ethiopian People’s Revolutionary Democratic Front (a coalition made up of Oromos, Amharas, Tigryans, and other ethnic groups from southern Ethiopia).”

His tenure was marred by protests by members of the Oromo community that began in November 2015. The bloody clashes with authorities left over a thousand dead. Hailemariam called it quits, “but before stepping down, he did everything he could to convince Tigryan leaders favorable to reform that he should be succeeded by Abiy Ahmed,” explained Prunier.

In February Abiy assumed leadership of the Oromo Peoples’ Democratic Organisation, one of the parties in the ruling coalition. The new prime minister has the advantage of speaking fluent Oromo, Amharic, and Tigrinya. He is also steeped in Islam and the traditions of the Orthodox Church. There was something to satisfy each element of the coalition, which controls all of Parliament.

In an interview with French weekly Jeune Afrique, Abiy’s predecessor Hailemariam admitted, “I wanted to bring about reforms… But I was unable to convince other party leaders. We need a new face at the head of the country and new momentum. Discontent amongst Oromos, the largest ethnic group in the country, is very important. As is that of the Amharas. I don’t belong to either of these groups, and my resignation will let my successor calm the people and pursue reforms.”

In less than four months, Abiy has moved quickly to change political and economic conditions. His efforts have caught the attention of the international community. In June, the UAE pledged a total of $3 billion in aid and investments. In mid-July, French President Emmanuel Macron invited Abiy to visit in the autumn. In a telephone conversation, he said that, “France and French businesses are available to accompany reforms.”

In Ethiopia, however, not everyone is convinced. On June 23, someone tossed a grenade into the crowd at a political rally for the prime minister. Two people were killed and over 150 injured.

“Some Tigrayans are unhappy because they have lost power. And there are Oromo secessionists who see Abiy Ahmed as a traitor,” said Prunier.

Inflation is high and the country owes huge debts to foreign creditors. The banking system is underdeveloped and few businesses accept credit cards.

Fighting between the Oromo and Somali peoples along the border between their two regions has forced over one million people to flee their homes in the last year, swelling the ranks of the country’s internally displaced.

The EPDRM continues to control Parliament and the judiciary. The legal system does little to ensure the independence of the press, the judiciary, or the police.

The savvy young prime minister has been on the charm offensive, spreading optimism at home and abroad, but the challenge now will be to manage those high expectations and to implement reforms in a political environment that remains relatively unchanged.