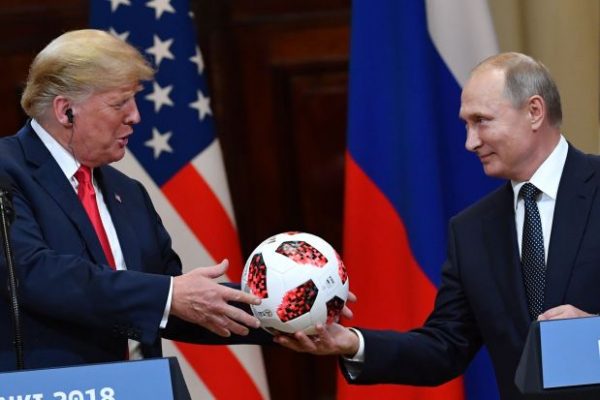 Russian President Vladimir Putin’s gift of a soccer ball to U.S. President Donald Trump in July 2018 set off a chorus of warnings ir could be bugged. Republican Senator Lindsey Graham even tweeted, “I’d check the soccer ball for listening devices and never allow it in the White House.”
Share:

National Security Adviser John Bolton cited Special Counsel Robert Mueller’s investigation into Russian interference in the 2016 presidential election in a statement announcing the delay. The White House last week announced Trump had invited Putin to Washington for a meeting in the fall, a move that was criticized by both Republicans and Democrats.
“The President believes that the next bilateral meeting with President Putin should take place after the Russia witch hunt is over, so we’ve agreed that it will be after the first of the year,” Bolton said.
There’s no deadline for Mueller to wrap up his probe and he’s given no signal that he intends to complete it by the end of the year. Trump frequently refers to the election interference investigation as a “witch hunt.”
The president provoked an uproar at home with comments during his Helsinki summit with Putin last week that cast doubt on U.S. intelligence findings that Russia interfered in the 2016 election.
Bugged ball

Putin’s gift of a soccer ball to Trump last week set off a chorus of warnings — some of them only half in jest — that the World Cup souvenir could be bugged. Republican Senator Lindsey Graham even tweeted, “I’d check the soccer ball for listening devices and never allow it in the White House.”

It turns out they weren’t entirely wrong. Markings on the ball indicate that it contained a chip with a tiny antenna that transmits to nearby phones.

But rather than a spy device, the chip is an advertised feature of the Adidas AG ball. Photographs from the news conference in Helsinki, where Putin handed the ball to Trump, show it bore a logo for a near-field communication tag. During manufacturing, the NFC chip is placed inside the ball under that logo, which resembles the icon for a WiFi signal, according to the Adidas website.

The chip allows fans to access player videos, competitions and other content by bringing their mobile devices close to the ball. The feature is included in the 2018 FIFA World Cup match ball that’s sold on the Adidas website for $165 (reduced to $83 in the past week).
BLOOMBERG
Share: