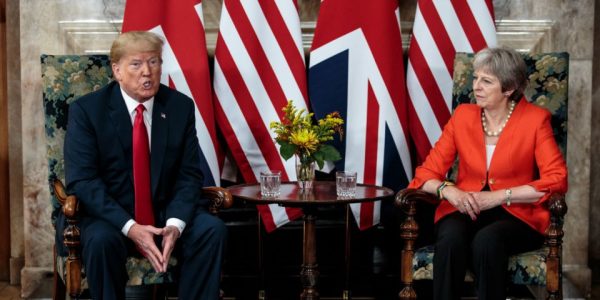 Donald Trump has accused the UK media of “fake news” after The Sun Newspaper published an on-the-record interview in which the US president criticised the prime minister’s Brexit plans.

“I didn’t criticise the PM,” Trump said at a press conference at the prime minister’s official retreat in Chequers on Friday afternoon.

“Unfortunately a story was done which was generally fine but didn’t put in what I said about the PM. I said tremendous things”

He added: “We record when we deal with reporters… It’s called fake news.”

Trump’s comments come after an explosive interview the president conducted with The Sun newspaper, in which he publicly criticised the prime minister’s Brexit strategy and suggested it would kill any chance of a US-UK trade deal.

Both Trump and May dismissed the idea that the UK government’s plan makes a trade deal impossible.

“If they go in a slightly different route, I hope you’re going to be able to trade with the US,” Trump said.

“I read reports that won’t be possible but after speaking to May’s people it will absolutely be possible. The trade is a little bit tricky.”

However, the US president said he wanted May to ensure there are “no restrictions” to trade, in the latest sign that the UK would have to lower its standards in areas like agriculture in order to strike a wide-ranging trade deal with the US. This would not be possible under the Brexit plan she unveiled to ministers last week.

Trump also told The Sun that May had ignored his advice on Brexit, telling the paper that “I would have done it much differently. I actually told Theresa May how to do it but she didn’t agree, she didn’t listen to me.”

He also suggested that Boris Johnson, who resigned as foreign secretary this week over May’s plans, would do a better job.

The president said the former foreign secretary would make a “great prime minister”, adding “I think he’s got what it takes.”

The interview was published as Trump dined with the prime minister at a black-tie dinner at Blenheim Palace. As images of the front page story were released on Twitter, fury spread among UK diplomats.

Trump today denied criticising May’s plans, saying that “perhaps the UK has left the EU, but whatever you do is ok with me.”

However, he doubled down on his comments about Johnson, before adding that “this incredible woman right here is doing a fantastic job.”

Trump also lashed out at US broadcasters CNN and refused to take a question from them.

“I don’t take questions from CNN. Fake news,” he told their reporter.

“Let’s go to John Roberts of Fox [instead]. A real network.”

In a statement, a spokesperson for the Sun said the president had “essentially retracted” his claim that their interview was fake news.

“We stand by our reporting and the quotes we used – including those where the President was positive about the Prime Minister, in both the paper and in our audio – and we’re delighted that the President essentially retracted his original charge against the paper later in the press conference.”

They added: “To say the President called us ‘fake news’ with any serious intent is, well… fake news.”