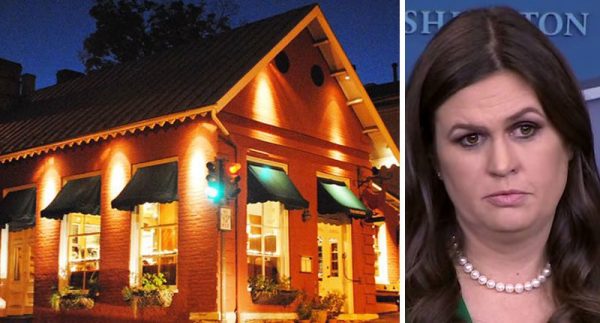 President Donald Trump on Monday slammed the central Virginia restaurant that booted his press secretary over the weekend as an establishment with “filthy canopies, doors and windows” and suggested it was also “dirty on the inside.”

“The Red Hen Restaurant should focus more on cleaning its filthy canopies, doors and windows (badly needs a paint job) rather than refusing to serve a fine person like Sarah Huckabee Sanders,” Trump tweeted Monday morning.

It was unclear Monday whether Trump had ever visited the establishment — the Red Hen in Lexington, Virginia, which is 50 miles northeast of Roanoke near the Shenandoah Valley — or how he would have determined its level of cleanliness.

The Red Hen passed its latest state health inspection, in February, without any violations.

Trump’s tweet came after White House press secretary Sarah Sanders said over the weekend that she had been asked to leave the restaurant because she worked in the Trump administration. She added that she “politely left” after the request.

The restaurant’s co-owner, Stephanie Wilkinson, later told The Washington Post that her staff had called her to report Sanders was at the restaurant on Saturday night. Wilkinson said several restaurant employees are gay and knew Sanders had defended Trump’s desire to bar transgender people from the military.

The Red Hen Restaurant should focus more on cleaning its filthy canopies, doors and windows (badly needs a paint job) rather than refusing to serve a fine person like Sarah Huckabee Sanders. I always had a rule, if a restaurant is dirty on the outside, it is dirty on the inside!

Last night I was told by the owner of Red Hen in Lexington, VA to leave because I work for @POTUS and I politely left. Her actions say far more about her than about me. I always do my best to treat people, including those I disagree with, respectfully and will continue to do so

A message left at the restaurant, which is closed on Monday, was not immediately returned.

Sanders’ tweet created a firestorm on Twitter, with many conservatives and Trump supporters, including her father, former Arkansas Gov. Mike Huckabee, chiming in with criticism of the restaurant.

Virginia’s Department of Health restaurant inspections are public records that are available online. In recent years, the Red Hen has passed its inspections with minor or no violations.

On Feb. 6, inspectors visiting Red Hen observed “good food/unit temperatures,” staff with “clean uniforms/aprons,” and an “excellent job on code-dating.” No follow-up was required, according to the report.

The restaurant passed inspection in 2017, as well, although inspectors found one minor violation — “pickles/jams in a hermetically sealed container” that was “not from an approved food processing plant” — that was corrected during the inspection.

The restaurant was not inspected in 2016 and passed in 2015 without any violations.

In 2014, two violations were observed by inspectors but were corrected by the restaurant.

Trump’s Mar-a-Lago resort was cited in January 2017 by Florida health inspectors with more than a dozen violations including issues regarding raw fish dishes that had “not undergone proper parasite destruction” and raw meats sitting in coolers that were not cold enough. Three of the violations were labeled high priority, meaning they could contribute to foodborne illness. The club, however, met the minimum standards to remain in operation.

And in 2012, DJT, the steakhouse at the Trump International Hotel in Las Vegas, was forced to shut down briefly when inspectors found more than 50 violations, including ones regarding expired and mishandled food.