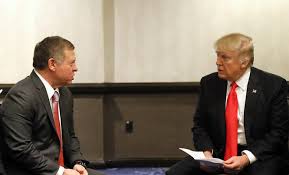 “Trump looks forward to reaffirming the strong bonds of friendship between the United States and Jordan. The leaders will discuss issues of mutual concern, including terrorism, the threat from Iran and the crisis in Syria, and working toward a lasting peace between Israelis and Palestinians,” it said.

“Building on previous conversations, they discussed increasing cooperation between the United States and Jordan, regional issues, the humanitarian situation in Gaza, and the Trump Administration’s efforts to facilitate peace between the Israelis and Palestinians,” the White House   also said.

Palestinian President Mahmoud Abbas has said he will reject any peace proposal made by the White House unless it rescinds its Jerusalem decision, referring to the Trump administration’s recognition of Jerusalem as Israel’s capital. The move is seen by Palestinians as a blatant show of pro-Israel bias.

Mass protests along the Israel-Gaza border since March 30 have resulted in the deaths of at least 130 Palestinian protesters.

Top Palestinian negotiator Saeb Erekat on Saturday accused the US peace team of working to topple the Palestinian Authority, as the American envoys wrapped up a visit to the region aimed to push the Trump administration’s peace plan and enlist humanitarian aid for the Gaza Strip.

They are expected to meet again with Netanyahu Saturday evening before returning to the US.

Mahmoud Abbas’s Palestinian Authority has refused to meet with the team, having boycotted the Trump administration since December.

“The goal behind this is to sustain the coup [by which Hamas seized Gaza from Abbas in 2007] and keep Gaza separated from the West Bank on the way to creating a mini-state in Gaza while bringing down the Palestinian Authority in the West Bank,” Erekat told Voice of Palestine radio, according to the PA’s official Wafa news agency.

Erekat alleged the US is working to remove Abbas and overthrow the PA, pointing to an article by Greenblatt earlier this month calling for Erekat’s ouster. Greenblatt accused Erekat of exacerbating the conflict and impeding progress toward peace after the latter attacked Washington over its peacemaking role.

“In order to target the leadership, the US administration starts by creating a state of destabilization and confusion in the West Bank and at the same time works on undercutting international consensus on rejecting the so-called deal of the century and American conspiracies and support for the Palestinian cause,” Erekat said.

He also said Kushner and Greenblatt are seeking the “termination” of the UN’s Palestinian refugee agency, in the wake of their alleged belief Jerusalem is no longer an issue after Trump recognized the city as Israel’s capital.

“They want to terminate the role of UNRWA by proposing direct aid to the countries hosting the Palestinian refugees and sideline the UN agency,” Erekat said. “On top of this, they are planning financial aid to the Gaza Strip worth one billion dollars for projects, also separate from UNRWA and under the title of solving a humanitarian crisis.”

He added: “All this is actually aimed at liquidating the issue of the Palestinian refugees.”

The US earlier this year cut some $250 million to the budget of the United Nations Relief and Works Agency for Palestine Refugees, or UNRWA.

The target date for unveiling Trump’s peace  initiative is uncertain gradually, however, details about what the plan is expected to include  are beginning to pile up, according to Israeli  media

Trump is reportedly  planning to offer the Palestinians Abu Dis rather than East Jerusalem as the capital of their state. In exchange, Israel will withdraw from three to five Arab villages and neighborhoods east and north of Jerusalem. The Old City will reportedly remain in Israel’s hands.

Abu Dis or Abu Deis  is a Palestinian village in the Jerusalem Governorate of the Palestinian National Authority bordering Jerusalem. Since the 1995 Interim Agreement on the West Bank and the Gaza Strip, Abu Dis land has been mostly part of “Area C“, under full Israeli control. According to the Palestinian Central Bureau of Statistics (PCBS) census, Abu Dis had a population of 12,604 in 2016.

Trump’s proposal also apparently won’t include the evacuation of isolated Israeli settlements, The Jordan Valley will remain under full Israeli control, and the Palestinian state will be demilitarized, with no army or heavy weaponry.

If this is indeed the final offer, it will be seen as a “state-minus,” which is very far from what the Palestinians are demanding. Therefore, Ramallah will apparently view it as a nonstarter. The sweeteners the administration will offer the Palestinians are mainly economic – a  package of incentives, undoubtedly partly funded by Saudi Arabia and other Gulf states. This is an issue that worries King Abdullah , because it could reportedly   give the Saudis and the Gulf states a foothold on the Temple Mount, for instance, by managing the entrances to the Mount. The   king will see this as a blow to his status as defender of Jerusalem’s holy places