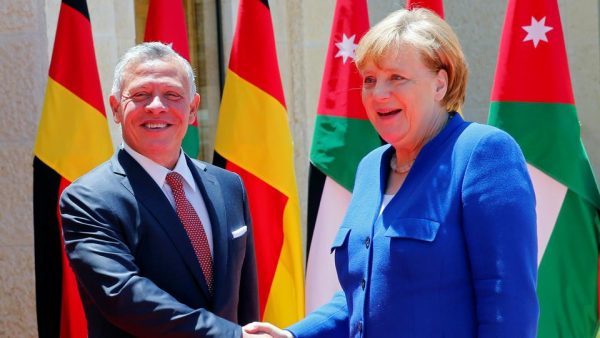 “Iran’s aggressive tendencies must not only be discussed, but rather we need solutions urgently,” she said on June 21 after meeting Jordan’s King Abdullah in Amman.

Merkel added that while European countries wanted to maintain the 2015 nuclear accord with Tehran, they remained concerned about Iran’s ballistic missile program, its presence in Syria, and its role in the bloody civil war in Yemen.

In May, U.S. President Donald Trump pulled his country out of the landmark deal that provided Iran with relief from sanctions in return for curbs on its nuclear program.

Trump said he was unhappy with the terms of the deal and with Iran’s continued testing of ballistic missiles and its support for militants in the Middle East.

Iran denied it backed insurgents in the region and said its nuclear program was only for civilian purposes.

Germany has remained in the nuclear deal and had unsuccessfully urged Washington to also stay with the accord.

Merkel also expressed support for Jordanian concerns about Iranian activity near its border with southwestern Syria.

Tehran is closely allied with Damascus and, along with Russia, has supported Syrian President Bashar al-Assad in the civil war against Western-backed rebels.

“You live not just with the Syria conflict, but also we see Iran’s activities with regard to Israel’s security and with regard to Jordan’s border,” she said.

Meanwhile, the White House announced on June 21 that King Abdullah will meet with Trump in Washington on June 25.

“President Trump looks forward to reaffirming the strong bonds of friendship between the United States and Jordan. The leaders will discuss issues of mutual concern, including terrorism, the threat from Iran, and the crisis in Syria, and working towards a lasting peace between Israelis and Palestinians,” a statement said.
RFERL