Russia, Saudis getting increasingly friendly. Could lead to big implications for oil prices 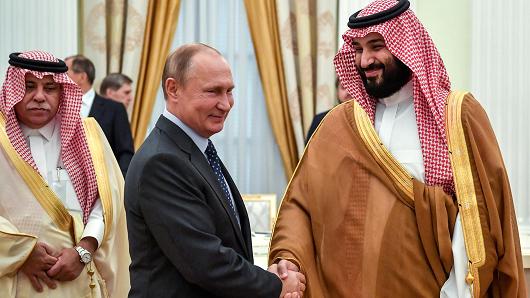 A complex web of relationships and geopolitical considerations may come into play at Friday’s OPEC meeting.
Saudi Arabia and Russia are looking to increase production, but not all OPEC members agree.
Both countries agreed to institutionalize the new relationship they forged as part of a an agreement between OPEC and other producers to cut back on production to stabilize the market.

Saudi Arabia may have gotten blown out by Russia during its first match at the World Cup, but there seems to be no hard feelings between Crown Prince Mohammed bin Salman and Vladimir Putin.

The two leaders met this past week as the Russian national soccer team clobbered Saudi Arabia 5-0 in Moscow. It appears both have agreed to cement the cornerstone of an already deepening energy and economic relationship, even as they look to alter a successful oil production deal that brought them together.

On Friday, Russia’s energy ministry said it has reached a general consensus with Saudi Arabia that its newfound relationship with the Organization of Petroleum Exporting Countries (OPEC) should be “institutionalized,” and be extended to monitor the market and take action if needed. OPEC will meet this upcoming Friday, and then with Russia and other non-OPEC members after that.

The chumminess of Russia and Saudi Arabia, however, is not unexpected. The relationship between two of world’s largest oil producers is being reinforced as OPEC is poised to grapple with several thorny issues. Chief among them is how to deal with the declines of supply from OPEC member Venezuela, and the effect of renewed sanctions on Iran by the United States.

Iran is being sanctioned by the U.S. after President Donald Trump withdrew from a deal between Iran and six other countries designed to end its nuclear program. Trump said the deal was not tough enough, and under the renewed sanctions, companies around the world in essence will have to stop dealing with Tehran if they want to deal with the world’s largest economy.

“This time more than most, [OPEC’s meeting] is almost more about geopolitics than it is about the market,” said Daniel Yergin, vice chairman of IHS Markit.

“Iranian exports are already down. One of the challenges they face is calibrating the impact of sanctions on Iran, which are already being felt in the market place, although they haven’t actually been imposed yet,” said Yergin. “There’s suddenly a disruption in Libya, and Venezuela keeps sinking.”

The U.S. is definitely the elephant in the room, with pressure also coming from Trump, who has tweeted twice, including this past week, about high oil prices.

“Of course, Trump has brought a new form of jawboning into play, but they’re hearing the same thing form the Indians who are very concerned about what high oil prices mean about growth and the economy, and next year’s election in India,” Yergin said.

Also playing out in the background are domestic political considerations, amid November’s hotly contested Congressional elections. Economic growth is a centerpiece of Republicans’ efforts to maintain an increasingly tenuous grasp of control on the House and Senate.

“This is one time when U.S. mid-term elections are going to figure into what OPEC does,” said Yergin.

“The message from Trump is he is not wanting high oil prices, either as a result of sanctions on Iran or heading into the November congressional election. These elections could be of such decisive importance,” he added.

When OPEC ministers meet, they are expected to consider altering a production deal that has held back 1.8 million barrels a day from the market for the past 18 months.

Russia has pushed for returning a million barrels per day back into the market relatively quickly. However, Saudi Arabia would like to try a lower amount to prevent the price from dropping too much, analysts said.

“I think they do something like return 500,000 barrels a day, but the actual increase will be a lot more. I think they’ll try to obfuscate and obscure as much as they can, to try to prop up the price,” said John Kilduff of Again Capital.

Oil prices took a beating Friday amid concerns about U.S. trade actions, and are off by more than 10 percent from last month’s high. The production cuts have been successful, shrinking world supplies and sending prices high enough to the point where Brent crude popped above $80 in May.

Now that both Russia and Saudi Arabia are looking to return some barrels to the market, not all OPEC members agree. Iran, Venezuela and Iraq have all said the current production agreement should stay in place — mainly because they’re feeling the economic pinch of sanctions.

“You now have in OPEC two countries that have been the subject of international sanctions and for one country, Iran, those sanctions have been supported by two members of OPEC, the [United Arab Emirates] and Saudi,” said Helima Croft, global head of commodities strategy at RBC. “There are a whole host of divisions going into this meeting.”

There are also a complicated series of factors impacting the decision, and it’s not just about stabilizing the market. Already, Venezuela has lost about 700,000 barrels a day this year, and analysts expect U.S. sanctions could remove 500,000 Iranian barrels a day from the market by the end of the year, she said.

Croft said Iran could be a bigger factor in the market later in the year, after the sanctions snap back. “Will they restart their nuclear program? I think the market just thinks, ‘well the Iranians aren’t going to want to get in trouble,'” she said.

But at OPEC, they could ultimately be sidelined by Saudi Arabia, which has the backing of the UAE and Kuwait.

“I think Iran becomes a story post-meeting,” Croft said, suggesting that Iran, Venezuela and Iraq may withhold support for a production boost. “Then you have the Saudis acting independently,” she said.

The OPEC ministers meeting Friday will be followed by a meeting with Russia and other non OPEC producers. Ahead of that, they will be attending an OPEC summit Wednesday and Thursday, which includes global energy ministers as well as the CEOs of international companies like Total and BP, and U.S. producers Pioneer and Hess.

OPEC announced in March that it would invite U.S. producers to the seminar to discuss shale production and technology, as the world’s largest economy continues to churn out massive amounts of crude. The U.S. has been pumping record amounts of oil week after week, with the latest weekly figures showing production of just under 11 million barrels a day.

U.S. output has surpassed Saudi Arabia, and its growing market share is another factor that makes production cuts difficult for OPEC and Russia.

“The Saudis really have a sense of obligation with Trump, after he ditched the Iran nuclear deal,” said Again’s Kilduff.

“It’s a weird dynamic. The Russians aren’t liking the U.S. getting up to 11 million barrels a day. They’ve foregone a lot of market share,” he added. “They could stick it to the U.S. and send prices lower to shake out some of our shale guys. They’ve got something up their sleeve.”

After talks with Saudi Energy Minister Khalid al-Falih in Moscow on Thursday, Russian Energy Minister Alexander Novak said that both nations “in principle” supported a gradual increase in production.

“We in general support this … but specifics we will discuss with the ministers in a week,” Novak said. He noted one possibility would be to gradually raise output by 1.5 million barrels per day, starting July 1.