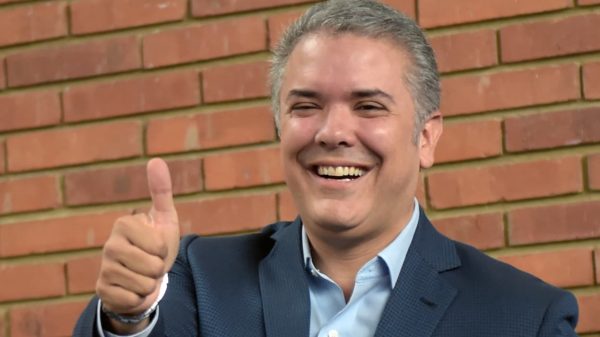 Conservative Ivan Duque won Colombia’s presidential election Sunday after a campaign that turned into a referendum on a landmark 2016 peace deal with FARC rebels that he pledged to overhaul.
Share:

Conservative Ivan Duque won Colombia’s presidential election Sunday after a campaign that turned into a referendum on a landmark 2016 peace deal with FARC rebels that he pledged to overhaul.

Petro, a leftist former mayor and ex-guerrilla, supports the deal.

Tensions over the deal became apparent in the immediate aftermath of Duque’s victory, after the president-elect lost no time in pledging “corrections” to the peace deal.

“That peace we long for — that demands corrections — will have corrections, so that the victims are the center of the process, to guarantee truth, justice and reparation,” Duque told supporters in his victory speech at his campaign headquarters.

“The time has come to build real change,” Duque said, promising a future for Colombians “of lawfulness, freedom of enterprise and equity,” after decades of conflict.

His vanquished opponent Petro promised to resist any fundamental changes to the deal.

“Our role is not to be impotent and watch it being destroyed,” he said.

FARC, which disarmed and transformed into a political party after the peace deal but did not contest the election, immediately called on Duque to show “good sense” in dealing with the agreement.

“What the country demands is an integral peace, which will lead us to the hoped-for reconciliation,” the FARC said in a statement after Duque’s presidential win.

The former rebels also called for an early meeting with Duque.

“One of the big questions here is what’s going to happen with the peace process,” analyst Yann Basset of the University of Rosario told AFP.

“He has said he will not end the agreement, but that he will make modifications, and it’s not very clear what these changes will be.”

“These are momentous elections,” President Juan Manuel Santos, who will step down in August, said as he cast his ballot early in the day.

His efforts to end the war with the Revolutionary Armed Forces of Colombia (FARC) brought him the Nobel Peace Prize, though he is leaving office with record unpopularity in a country of 49 million people.

Duque’s victory means he will be Colombia’s youngest president since 1872.

He comfortably won the first round last month, having campaigned on a pledge to rewrite the agreement signed by Santos.

As he voted surrounded by his children, Duque said he wanted to make sure that those who commit crimes “pay for them.”

The former economist and first-term senator says he wants to keep ex-FARC rebels from serving in Congress. The agreement allowed the group to transform itself into a political party.

Duque is buoyed by the backing of his popular mentor, former president and now senator Alvaro Uribe, whose two-term presidency from 2002-2010 was marked by all-out war on the FARC.

Petro, 58, was the first leftist to reach a presidential runoff in Colombia, and believed his presence showed the South American country had shed its suspicions of the left, tainted by 50 years of conflict.

“The need to change things is fundamental,” he said after voting.

“We are going to build a humane Colombia that is at peace, that is reconciled with itself.”

A former member of the disbanded M-19 guerrilla group, Petro had promised to implement the agreement with the FARC, whose 7,000 ex-combatants have struggled to return to civilian life.

FARC leader Rodrigo Londono, known as Timochenko during the conflict, said: “With either one of the two (candidates), we cannot let down our guard.”

Highlighting Colombia’s glaring inequalities during his campaign, Petro also said he would buy out land owned by the big agro-industrial companies and redistribute it to poor farmers.

‘We are in limbo’

“The biggest challenge will be to adopt a clear position on the peace agreement because, for the moment, we are in limbo,” Fabian Acuna, professor of political science at Colombia’s Javeriana University, told AFP.

“It will be very costly to go backwards,” Acuna warned.

According to Andres Ortega of National University, Duque will “arrive with a very strong coalition in Congress,” where the right swept the polls in March legislative elections.

The FARC withdrew from the presidential elections, having suffered a drubbing in its first electoral contest as a political party in March, polling less than half a percent.

It still gets 10 seats in Congress as a result of the peace agreement — a clause Duque is intent on scrapping.