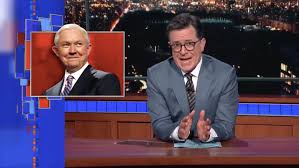 The “Late Show” host took issue with Sessions citing the Bible in support of separating migrant parents from their children at the border.
“Now usually for me to talk about a news story on this show, especially a tragic one, it has to be something that everybody’s already talking about … But this story is different, because this is the conversation everyone should be having,” Colbert said.
“I would cite you to the Apostle Paul and his clear and wise command in Romans 13 to obey the laws of the government because God has ordained the government for his purposes,” Sessions said at a press event Wednesday. “Orderly and lawful processes are good in themselves. Consistent, fair application of law is in itself a good and moral thing and that protects the weak, it protects the lawful. Our policies that can result in short-term separation of families are not unusual or unjustified.”
Colbert took severe issue with Sessions’ remarks.
“Hey, don’t bring God into this,” Colbert said. “But if he just read a little bit further into Romans 13:10, ‘Love thy neighbor as thyself. Love does no harm to a neighbor. Therefore, love is the fulfillment of the law.'”

What does the Bible verse mean?

It’s been called one of the most important and most misunderstood passages in the Bible: Romans 13:1-7.

“The most historically influential paragraph Paul ever wrote,” in the words of one scholar.
Likely written by the Apostle Paul around 57 AD, Romans 13, including the snippet cited by Attorney General Jeff Sessions on Thursday, instructs Christians to submit to “God’s servants.” That is, the government.
“Let everyone be subject to the governing authorities, for there is no authority except that which God has established,” the passage says. “The authorities that exist have been established by God. Consequently, whoever rebels against the authority is rebelling against what God has instituted, and those who do so will bring judgment on themselves.”
Romans 13 has been cited by Nazi sympathizers and apartheid-enforcers, slave owners and loyalists opposed to the American Revolution. Modern Christians have wrestled with how to apply the passage to issues like abortion, same-sex marriage and taxes.
Sessions cited Romans 13 to defend the Trump administration’s “zero-tolerance” prosecution policy on illegal immigration. In a speech addressed to his “church friends,” Sessions said:
White House press secretary Sarah Huckabee Sanders defended Sessions, saying, “It is very biblical to enforce the law.”
The Southern Baptist Convention, for example, passed a resolution Tuesday that cited Scripture six times to make the case for immigration reform. (Some Southern Baptists also cited Romans 13 in the controversial decision to allow Vice President Mike Pence to address their annual meeting.)
But what did Paul really mean when he wrote his letter to the Romans? Should Christians be expected to obey all human laws and cooperate with all regimes? And why would Paul counsel submission to a state power that had executed his savior?
Here are five ways Christians have tried to answer those questions:

1. The Bible is full of civil disobedience.

In citing Romans, Sessions made a small but telling slip. He said Paul commanded Christians to “obey the laws of the government because God has ordained them.”
But Romans doesn’t quite say that. It says obey the “governing authorities” — that is, the government, not the laws. You could argue that one implies the other, but the Bible teems with examples of heroes who disobey the law.
Take Daniel, for example, who was thrown to the lions because he wouldn’t obey an edict requiring all subjects of King Darius to pray only to him. Daniel went home, threw open the windows for all to see and got on his knees, defying the edict. It was a blatant act of civil disobedience.
“Whenever laws are enacted which contradict God’s law, civil disobedience becomes a Christian duty,” the late evangelical eminence John Stott wrote in a Bible study on Romans 13.

Big Brother wasn’t around in the first century, but life as a Christian, especially a Jewish Christian, wasn’t free from state surveillance.
Just a few years before Paul wrote his letter to the Romans, the empire had expelled Jews from Rome for “rioting at the instigation of Chrestus,” according to the Roman historian Suetonius. Some scholars believe Chrestus is a misspelling of Christ.
It’s not too big a stretch to imagine that Paul, writing to a small band of religious subversives in the capital of the empire, would suspect that his letters could fall into imperial hands.
“Paul is probably writing to be read by government officials as well as by the church in Rome,” John Piper, an influential evangelical pastor, said in a sermon series on Romans 13.
“He knows that this letter will find its way into Caesar’s household and into the hands of the civil authorities. He wants them to understand two truths. One is that Christians are not out to overthrow the empire politically by claiming Jesus, and not Caesar, is Lord.”
The other thing Paul wants the Romans to know, Piper says, is that their authority is based on God’s.

3. Paul was talking about angels, not attorneys general.

Who, exactly, are the “authorities” that Paul is urging Christians to submit to?
Oscar Cullman, a New Testament scholar who died in 1999, posed an interesting theory: Paul was talking about cosmic authorities, not civil ones. Or rather, he was talking about both.
As Cullman noted, some early Christians, like some first-century Jews, believed that guardian angels — “the angels of the nations” — sat above the earthly rulers, somewhere between God and man.
In other parts of the New Testament, Paul sometimes using the same Greek word to describe earthly and angelic authorities.
On a practical level, you could understand why Cullman, a Lutheran who lived in Europe during the rise of Hitler, would be attracted to this idea. It’s easier to counsel submission to angels than to Nazis.
But many scholars have dismissed Cullman’s theory, saying the “authorities” in Romans 13 refer to the earthly government. Later in Romans 13, Paul notes that Christians pay taxes to “God’s servants” — and, as we all know, the taxman is no angel.

4. Paul was worried about a Jewish uprising.

Much of Paul’s letter to the Romans is about Jewish/Gentile relationships. This was a time when Christians were divided about whether “true” Christians had to be one or the other.
Some Bible scholars theorize that Paul feared Jewish Christians would rebel against the Roman authorities. He had good reason to be worried. Jewish Christians had just been allowed back into Rome after being expelled. A governmental crackdown could have crushed the small and fractious Christian community.
“Paul was not attempting in Romans 13:1-7 to write out a manifesto for Church-State relations for the next two or three millennia,” writes Matthew Neufeld, a Mennonite scholar.
“His concern was pastoral and local. … Paul was advising against anti-Roman and Palestinian nationalist sentiments among the Jewish Christians in Rome.”

5. Paul was being ironic.

At first glance, writes British scholar T.L. Carter, Romans 13 may look like “an embarrassingly unqualified endorsement of the political status quo.”
But Paul was likely aware of the Jewish expulsion from Rome, as well as other persecutions, Carter argues. So it’s hard to fathom why he would portray the government as divinely sanctioned.
Paul’s praise for government authority so over the top, it’s possible that he meant to be ironic, Carter says. In other words, Romans 13 is not praise, it’s a cleverly disguised critique.
“By using the technique of irony, Paul was able to express his criticism without fear of repercussions from the authorities, who may have been oblivious to the disparity between the ideal he portrays and the reality of their government.”
Carter acknowledges that his interpretation is somewhat idiosyncratic. Many Christians take a more straightforward reading of Romans 13, even as they struggle to apply to modern life.
“It is only a slight exaggeration to say that the history of the interpretation of Romans 13:1-7,” says New Testament scholar Douglas Moo, “is the history of attempts to avoid what seems to be its plain meaning.”
CNN
Share:
Share Tweet Pin It +1
This error message is only visible to WordPress admins