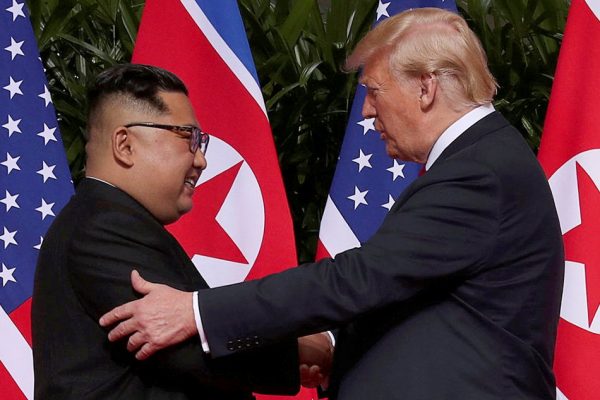 U.S. President Donald Trump said he had forged a “good relationship” with North Korean leader Kim Jong Un at the start of a historic summit in Singapore on Tuesday, as the two men sought ways to end a nuclear standoff on the Korean peninsula.

Kim said the meeting was “a good prelude to peace”, but there was no immediate word on any substantive progress in their discussions.

Should they succeed in making a diplomatic breakthrough, it could bring lasting change to the security landscape of Northeast Asia, like the visit of former U.S. President Richard Nixon to China in 1972 led to the transformation of China.

Both men had looked serious as they got out of their limousines for the summit at the Capella hotel on Singapore’s Sentosa, a resort island with luxury hotels, a casino, manmade beaches and a Universal Studios theme park.

But, with cameras of the world’s press trained on them, they displayed an initial atmosphere of bonhomie as they met.

After a handshake, they were soon smiling and holding each other by the arm, before Trump guided Kim to the library where they held a meeting with only their interpreters. Trump had said on Saturday he would know within a minute of meeting Kim whether he would reach a deal.

Inside, they sat alongside each other against a backdrop of North Korean and U.S. flags, with Kim beaming broadly as the U.S. president gave him a thumbs up.

The combatants of the 1950-53 Korean War are technically still at war, as the conflict, in which millions of people died, was concluded only with a truce.

After initial exchanges lasting around 40 minutes, Trump and Kim emerged, walking side-by-side through the colonnaded hotel before entering a meeting room, where they were joined by their most senior officials.

Kim was heard telling Trump through a translator: “I think the entire world is watching this moment. Many people in the world will think of this as a scene from a fantasy…science fiction movie.”

“We overcame all kinds of scepticism and speculations about this summit and I believe that this is good for the peace,” he said. “I believe this is a good prelude for peace.”

Financial markets were largely steady in Asia and did not show any noticeable reaction to the start of the summit. The dollar was at a three-week high and the MSCI index of Asia-Pacific shares was largely unchanged from Monday.

While Trump and Kim search each other’s eyes and words for signs of trust or deceit, the rest of the world will be watching, hoping that somehow these two unpredictable leaders can find a way to defuse one of the planet’s most dangerous flashpoints.

A body language expert said both men tried to project command as they met, but also displayed signs of nerves.

After the meetings, the two teams met for a working lunch, where beef short ribs, sweet and sour pork and “Daegu Jormin”, or Korean braised cod, were served for the main course, according to the menu. That was to be followed by dark chocolate tarts, pastries and vanilla ice cream for dessert.

In the hours before the summit began, Trump expressed optimism about prospects for the first-ever meeting of sitting U.S. and North Korean leaders, while Pompeo injected a note of caution whether Kim would prove to be sincere about his willingness to denuclearize.

Officials of the two sides held last-minute talks to lay the groundwork for the summit of the old foes, an event almost unthinkable just months ago, when they were exchanging insults and threats that raised fears of war.

Staff-level meetings between the United States and North Korea were going “well and quickly,” Trump said in a message on Twitter on Tuesday.

But he added: “In the end, that doesn’t matter. We will all know soon whether or not a real deal, unlike those of the past, can happen!”

Pompeo said earlier the summit should set the framework for “the hard work that will follow”, insisting that North Korea had to move toward complete, verifiable and irreversible denuclearization.

North Korea, however, has shown little appetite for surrendering nuclear weapons it considers vital to the survival of Kim’s dynastic rule.

Sanctions on North Korea would remain in place until that happened, Pompeo said on Monday. “If diplomacy does not move in the right direction … those measures will increase.”

The White House said later that discussions with North Korea had moved “more quickly than expected” and Trump would leave Singapore on Tuesday night after the summit, rather than Wednesday, as scheduled earlier.

Kim is due to leave on Tuesday afternoon, a source involved in the planning of his visit has said.

One of the world’s most reclusive leaders, Kim visited Singapore’s waterfront on Monday, smiling and waving to onlookers, adding to a more affable image that has emerged since his April summit with South Korean leader Moon Jae-in.

Trump spoke to Moon and Japan’s Prime Minister Shinzo Abe, both key allies of Washington in the region, to discuss developments ahead of the summit.

“I too, got little sleep last night,” Moon told his cabinet in Seoul as the summit began in Singapore.

“I truly hope it will be a successful summit that will open a new age for the two Koreas and the United States and bring us complete denuclearization and peace.”

@realDonaldTrump took a stroll with #KimJongUn and spoke to us reporters #TrumpKimSummit pic.twitter.com/v9vJnoQLms


Leaders prepare for ‘signing’ after ‘fantastic meeting’
Reporters are in a room that has a desk and two chairs flanked by US and North Korean flags, waiting for Trump and Kim to emerge.

Julian Borger says it is all in the detail though: there are two pens inscribed in gold and the inscription appears to be Trump’s signature.

In Singapore, a desk has been set up in the Capella Hotel with two chairs and two pens. The pens are black and inscribed in gold. The inscription appears to be Donald Trump's signature.

After a working lunch concluded a morning of negotiations in Singapore, the US president said a lot of progress had been made as they tried to “solve” the Korean Peninsula stand-off.

Asked about the discussions, he said: “A really fantastic meeting – a lot of progress. Better than anybody could have expected. Top of the line.

The US president said his one-on-one meeting with the North Korean leader, which lasted around 40 minutes, was “very good” and predicted “tremendous success”.

The comments came after the two leaders shared a 12-second handshake as they met for the first time in front of a dozen American and North Korean flags.

Mr Trump patted Kim on the arm and shared some words before the pair turned and posed for the cameras in Singapore.

The body language was surprisingly warm, with the pair at times smiling and laughing as they walked along a collonade towards their meeting.

Mr Kim greeted his American counterpart with the words: “Nice to meet you Mr. President.”

Never before have a sitting North Korean and American leader met. The summit took place at a luxury hotel on Sentosa Island, just off the Singaporean coast.

Before their talks – which they held alone except for interpreters – both men expressed optimism about the summit.

Mr Trump said: “I feel really great. We are gonna have a great discussion and I think tremendous success. We will be tremendously successful. It’s my honour. We will have a terrific relationship, I have no doubt.”

Mr Kim said: “The way to come to here was not easy. The old prejudices and practices worked as obstacles on our way forward but we overcame all of them and we are here today.”

The sight of the two men sitting side-by-side encapsulated a remarkable turnaround in the pair’s relationship, given they were trading insults and threats last year.

It is not known what exactly the pair discussed during their one-on-one meeting, though North Korea’s denuclearisation was on the agenda.

But it’s unclear yet exactly what that means. A press conference is scheduled for 4 p.m. local time in which more details will come forward.

As they began, Mr. Trump said he thinks he and Kim will have a “terrific relationship,” and Kim, through a translator, said North Korea had to overcome a number of “obstacles” to get to this moment.

The stakes are high — the U.S. seeks nothing less than the complete and verifiable denuclearization of the Korean peninsula, and Kim wants to see the sanctions on the North eased.

Mr. Trump and Kim participated in a one-on-one meeting, with translators only, followed by an expanded meeting including their top advisers, and a working lunch.

According to the document Mr. Trump and Kim signed, Secretary of State Mike Pompeo and a high-level North Korean official will hold “follow-up” negotiations at the earliest possible date, “to implement the outcomes of the U.S.-DPRK summit.”

The White House has yet to officially release the document, but show-up photos of the document reveal some of its contents.

Here are the four components of agreement outlined in the document:

“The United States and the DPRK commit to establish new U.S.-DPRK relations in accordance with the desire of the peoples of the two countries for peace and prosperity.”

“The United States and the DPRK will join their efforts to build a lasting and stable peace regime on the Korean peninsula.”
“Reaffirming the April 27, 2018 Panmunjom Declaration, the DPRK commits to work toward complete denuclearization of the Korean peninsula.”
“The United States and the DPRK commit to recovering POW/MIA remains, including the immediate repatriation of those already identified.”
Trump says Kim has a great personality, says they will meet many times
Mr. Trump, speaking to reporters briefly, was asked what surprised him most about Kim.

This summit isn’t the last, said Mr. Trump who said he expects to meet with Kim “many” times.

“Today we had a historic meeting and decided to leave the past behind,” Kim said through a translator, at the signing table. “The world will see a major change.”