Rodman to head to Singapore for U.S.-North Korea summit. “No, he wasn’t invited, says Trump 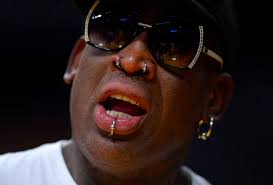 “I will be flying to Singapore for the historical Summit. I’ll give whatever support is needed to my friends, @realDonaldTrump and Marshall Kim Jong Un,” Rodman said in a Twitter post.

There was no indication Rodman would be involved in any official talks at Tuesday’s summit in Singapore. The White House did not immediately comment on his announcement.

However, Trump, before leaving to attend the Group of Seven summit in Canada, was asked whether Rodman was invited to Singapore and he said, “No, he wasn’t.”

Rodman is one of a handful of Westerners to have visited reclusive North Korea and met with Kim, and he most recently traveled there a year ago as a private citizen.

After that five-day visit in June 2017, Rodman told reporters: “I’m just trying to open the door.”

This trip, like the last one, is sponsored by potcoin.com, the crypto-currency provider for the legal marijuana industry.

Before Trump became president, Rodman appeared twice on his “Celebrity Apprentice” show and praised the billionaire real estate developer on Twitter during the 2016 presidential campaign.

Rodman has faced ridicule and criticism for his trips to North Korea, which some U.S. politicians and activists view as serving only as fodder for North Korean propaganda.

His earlier visits to North Korea included a basketball game that he organized, an event chronicled in the documentary film “Big Bang in Pyongyang,” which featured Rodman singing “Happy Birthday” to Kim, as well as scenes of inebriated and erratic behavior by the basketball Hall of Famer.