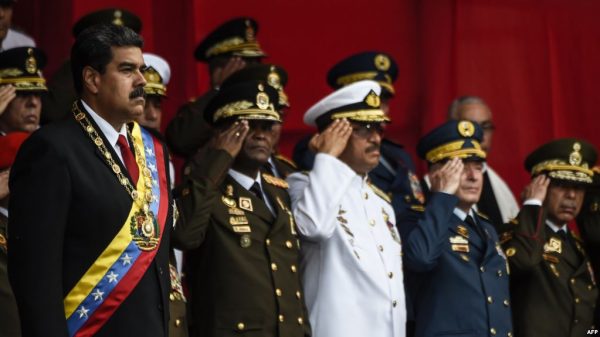 Venezuelan President Nicolas Maduro, left, and members of the military high command attend a military honor ceremony in Caracas on May 24, 2018.
Share:

Two active generals with Venezuela’s National Guard were part of a group of 15 military officials arrested around the time of the socialist-run nation’s widely criticized May 20 presidential election, a local rights group said on Monday.

Generals Pedro Naranjo and Nelson Morales appeared on Sunday before a military tribunal at the Defense Ministry, according to Gonzalo Himiob of the Penal Forum group, who said the men were the highest-ranking recent detainees from the armed forces.

Scores of soldiers have been detained on accusations of conspiring against the leftist government of Nicolas Maduro or deserting. Penal Forum said there were now 355 “political prisoners” in total in Venezuela.

The Information Ministry did not immediately respond to a request for comment. But the Maduro government, which rejects use of the term “political prisoner,” has said all politicians and members of the security forces in detention face legitimate criminal charges, including coup-plotting.

Internal military documents show arrests have been rising sharply within the armed forces, where there is discontent within the ranks, especially at food shortages and dwindling salaries due to Venezuela’s crushing economic crisis.

Documents recently reviewed by Reuters showed the number of new detentions of soldiers for treason, rebellion and desertion rose to 172 in the first four months of 2018, up 3-1/2 times over the same period last year.

Penal Forum says at least 48 military officials, including the group of 15, have been arrested this year.

Maduro, a 55-year-old former bus driver who succeeded Hugo Chavez in 2013, says he is the victim of a U.S.-led conspiracy to topple him and take over Venezuela’s oil reserves.