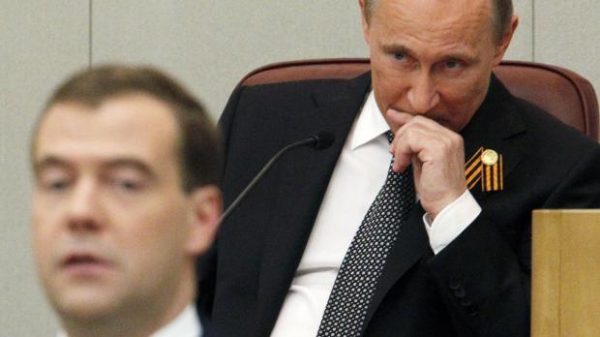 Dmitry Medvedev is shown at the Russian Parliament with Vladimir Putin in 2012 when they swapped jobs . Putin may do this again in 2024 when he will no longer be entitled to run for president
Share:

Russian president Vladimir Putin  promised  to step down from his post in 2024 when his current term expires, but did not promise not to seek  again the Premier position,  a maneuver he would be legally entitled to carry out  as he has done in the past . Extending his tenure by six years to 24  would make him Moscow’s longest-serving leader since Soviet dictator Josef Stalin.

St Petersburg– Vladimir Putin said on Friday he would respect the Russian constitution which bans anyone from serving two consecutive presidential terms, meaning he will step down from his post in 2024 when his current term expires.

His remarks, made to reporters at an economic forum in St Petersburg and broadcast on state TV, are not a surprise and do not necessarily mean he will relinquish power in six years.

Putin has stepped down as president once before, in 2008, after serving two back-to-back terms only to return in 2012 after doing a stint as prime minister, a maneuver he would be legally entitled to carry out again.

“I have always strictly abided by and abide by the constitution of the Russian Federation,” Putin said, when asked if and when he would be leaving office.

“In the constitution it’s clearly written that nobody can serve more than two terms in a row … I intend to abide by this rule.”

Putin easily won re-election in March, extending his tenure by six years to 24 – which would make him Moscow’s longest-serving leader since Soviet dictator Josef Stalin.