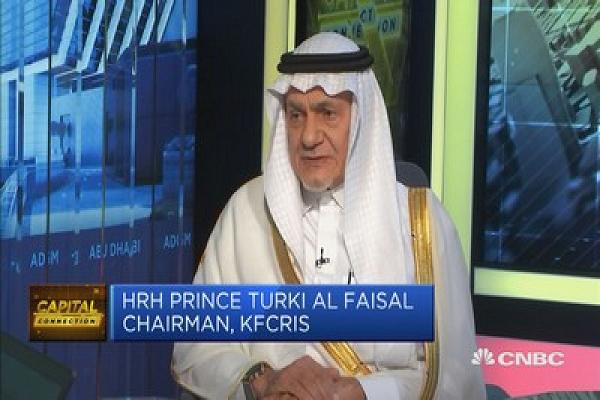 The U.S. decision to shift its embassy in Israel from Tel Aviv to Jerusalem will make the Middle East a more dangerous place, according to Prince Turki Al-Faisal of Saudi Arabia.

“America has stood for rule of law, for justice, for respect of international agreements…and now we see all of that being pushed aside for the sake of internal political calculations,” Al-Faisal, a former chief of Saudi Arabia’s intelligence agency, told CNBC’s Hadley Gamble on Monday.

“It’s not a step that will bring peace to Palestine or the Middle East, “he said.

A delegation of senior White House advisors, including Ivanka Trumpand her husband Jared Kushner, will attend Monday’s ceremony of the new U.S. institution. President Donald Trump first announced the news in December when he formally recognized the holy city as Israel’s capital in a move that broke decades of American policy.

Israel has long been a close American ally but Washington — until now — refrained from acknowledging Jerusalem as the country’s seat of government since the city remains a central battleground in the political war between Palestine and Israel.

The new embassy has “raised the volume of anti-American rhetoric not just in Palestine but throughout the Arab and Muslim world,” said Al-Faisal, who was Saudi Arabia’s ambassador to the U.S. from 2005 to 2007.

“It’s given impetus to the terrorist groups that have always claimed America was against Arabs and it allows Iran to capitalize on this issue by accusing America of supporting Israel,” he continued.

On the topic of Tehran however, Al-Faisal appeared to side with Trump’s actions.

The 2015 agreement is fundamentally “flawed,” according to Al-Faisal, who said that it “concentrated only on one issue of Iranian conduct, which is nuclear enrichment, and left the rest of Iranian politics, interventionism and ambition up in the air.”

He clarified that the U.S. leader was not withdrawing from the agreement, but offering to renegotiate and add to it.

Riyadh and Tehran are bitter rivals, with ties scarred by religious differences and a quest for regional dominance.

With American sanctions in place, the international community is likely to end ties with the Islamic republic, dealing a blow to the domestic economy.

Iran is basically bankrupt, so it has to rely on foreign countries to provide financing for any business dealings, said Al-Faisal.

Rouhani now “has to scramble to find support wherever he can find it [but] I don’t think he will get much success, frankly, because the American sanctions are going to be very strict and very enforceable, not just on Iranian companies but anyone who deals with Iran,” he warned.