Friends, relatives of the 17,000 missing since the Lebanese civil war threaten to boycott polls 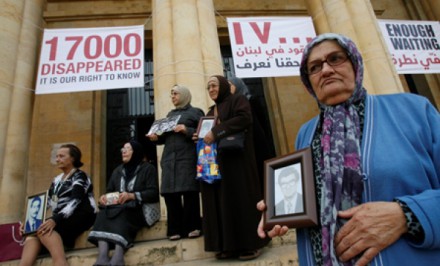 Friends and relatives of  the 17,000 people who went missing during Lebanon’s civil war (1975-1990) are calling for a boycott of upcoming parliamentary polls unless candidates first pledge to adopt legislation aimed at finding their lost loved ones.

Dozens of people staged a march in Beirut on Friday, which marked the 43rd anniversary of the outbreak of the civil war.

Demonstrators demanded the adoption of legislation aimed at determining the fates of the  people who went missing during the destructive conflict.

Wedad Helwani, who heads a popular committee for the families of the “disappeared”, urged her compatriots to “refrain from voting for any candidate unless they first sign a petition demanding such legislation”.

She went on to criticize successive Lebanese governments for their silence over the missing persons.

For over 20 years, hundreds of   Lebanese and Palestinian, Muslim and Christian families have demanded authorities to reveal the fate of the  thousands of political prisoners believed to have disappeared at the hands of Syrian troops who entered Lebanon shortly after the outbreak of the  civil war.

Successive Lebanese governments have made apparent attempts to address the issue, even including it in cabinet programs.

Rights groups say thousands of men, women and children disappeared at the hands of Hafez Assad, Bashar’s predecessor and late father, during the civil war, a spiraling bloodbath which tore Lebanon apart on confessional lines.

Syria withdrew from its smaller neighbor in 2005 under massive international pressure following the assassination of former premier Rafik Hariri.

The Syrian regime  has long denied holding any prisoners of conscience, but on four different occasions between 1976 and 2000 has released some Lebanese who had been held in Syrian prisons.

While Syria declared it no longer had any Lebanese detainees after the prisoner release in 2000, Foreign Minister Walid Muallem made a statement to the contrary during a fence-mending trip to Lebanon in 2008.

“Those who have waited more than 30 years since the start of the (Lebanese) civil war can wait another few weeks,” Muallem said at the time.