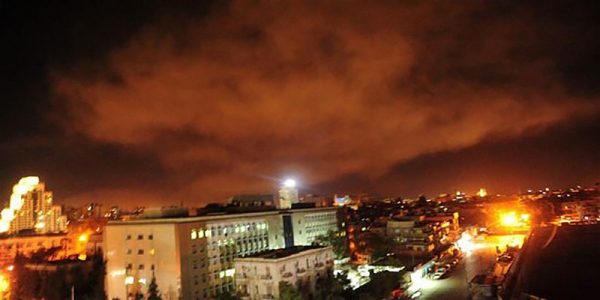 A photo released on April 14, 2018 via the twitter page of the Syrian governments central military media shows an explosion on the outskirts of Damascus after Western strikes reportedly hit Syrian military bases and chemical research centres in and around the capital.AFP – Getty Images
Share:

The Syrian regime fired 40 defensive missiles at thin air in a failed attempt to save the three Syrian chemical weapons sites destroyed by allied air strikes, the Pentagon said.

A total of 105 missiles rained down on a research centre in Damascus as well as a storage site and a bunker 15 miles west of Homs at 4am Syrian time.

Britain launched eight Storm Shadow cruise missiles from the sky as the US and France provided support from the sea and jets.

France fired 12 cruise missiles, three from a Frigate and nine from aircraft, while the US provided the bulk of the firepower with 85 missiles in total.

The attack targeted Syria from all angles, with ships and submarines firing from the Red Sea, North Arabian Gulf and the Eastern Mediterranean and jets which took off from Cyprus, France and, reportedly, Qatar.

Addressing the media in Virginia, Lt. Gen. Kenneth McKenzie Jr, the director of joint staff, said he would pick three words to describe the attack: “Precise, overwhelming and effective”.

He said Syria had launched 40 surface-to-air missiles in an attempt to shoot the allied weapons down, but that most of them had been fired after the last Syrian target had already been destroyed.

Earlier, Russia had claimed its Syria’s Cold War era air defence system shot down 71 of the missiles launched by the US, Britain and France.

In retaliation for Bashar al-Assad’s attack on civilians in Douma last Saturday, air strikes  targeted a scientific facility near Damascus and two storage facilities near Homs.

Among the weapons used in the bombardment which lasted no more than 70 minutes were British Storm Shadow cruise missiles known as “bunker busters”. The sophisticated weapons weigh more than a ton, measure more than five metres in length and can penetrate targets underground.

Four RAF Tornados GR4s joined the strikes against Syria overnight, launching the Storm Shadow missiles at a base 15 miles west of Homs.

The US’s top general played down the Syrian response, and asked if there had been any Russian retaliation, General Dunford said: “We did have some initial surface-to-air missile activity from the Syrian regime. That’s the only retaliatory action we’re aware of at this time.

“We’ve completed the targets that were assigned to the United States central command. Those operations are complete.”

He added: “We specifically identified these targets to mitigate the risk of Russian forces being involved. We did not do any co-ordination with the Russians on the strikes, nor did we pre-notify them.”

He said: “The reason we have taken this action is because we all saw the images last week of the suffering that had been inflicted on innocent men, women and children, and there has been a need to act.

“That’s why last night we deployed four Tornados armed with Storm Shadow cruise missiles. You will be pleased to hear all of those crews have returned safely and every early indication is that is has been a highly successful mission.

“This is something we have been in discussion with the US and French over the last few days but obviously the meeting of Cabinet is where this was properly discussed.”

Mr Williamson said the service personnel involved in last night’s attack have played “an important role in terms of degrading the Syrian regime in using chemical weapons in the future”.

Russia had boasted of its S-400 surface-to-air defence system, but it does not appear to have been used in the overnight strikes in Syria