Trump warns of Syria action as US, Russia clash at UN 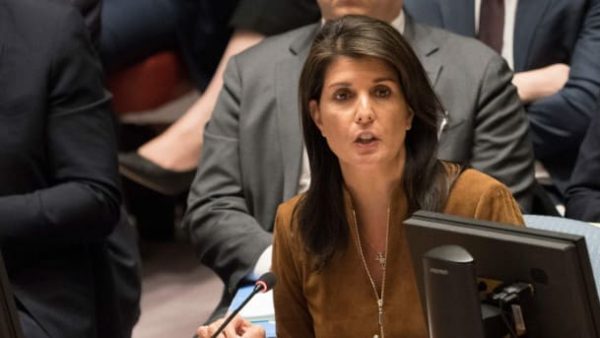 President Donald Trump warned Monday that Damascus and Moscow may be forced to pay for the latest alleged chemical weapons atrocity of the Syrian civil war, promising a decision on military action within hours.

The US leader met with his cabinet and then dined with top generals, telling reporters “we have a lot of options militarily and we’ll be letting you know pretty soon … probably after the fact.”

Trump was speaking after a stormy emergency session on the UN Security Council in New York, where Russia’s ambassador Vassily Nebenzia rejected a US call for the world body to set up a probe to identify the perpetrators of the alleged Douma outrage.

But US ambassador Nikki Haley warned the United States would act regardless of the outcome of the UN debate, and allies France and Britain had already backed joint action in response to what rescuers called a “poisonous chlorine gas attack” late Saturday.

“We have reached the moment when the world must see justice done,” Haley declared.

Diplomats said votes were expected Tuesday on competing US and Russian draft resolutions, but either power’s text would be likely to be vetoed by the other.

“History will record this as the moment when the Security Council either discharged its duty or demonstrated its utter and complete failure to protect the people of Syria,” Haley added.

“Either way, the United States will respond,” she warned.

If it sounded like Haley’s mind was made up, she was only echoing the signals from Trump’s White House.

“We’re going to make a decision tonight or very shortly thereafter,” he said.

The punitive raid did not draw US forces any deeper into Syria’s civil war, but nor did it dissuade Syria or its Russian and Iranian backers from pursuing their campaign against rebel groups. And any new action raise the risk of open conflict with Russia which, like Iran, has deployed forces to defend Assad’s regime.

Nebenzia, reflecting earlier warnings from President Vladimir Putin’s Kremlin, said: “From what we hear now, I am afraid they are looking for a military option, which is very, very dangerous.”

Earlier, Trump was asked whether Putin bore some of the responsibility for the latest attack. “Everybody is going to pay a price. He will. Everybody will,” he warned.

British Foreign Secretary Boris Johnson spoke with the acting US secretary of state and, according to London, they agreed that “this attack bore hallmarks of previous chemical weapons attacks by the Assad regime.”

As the UN debate took place, a huge blast tore through a multi-story building in the jihadist-held city of Idlib, in northern Syria.

The cause of the explosion was not immediately apparent, but the Britain-based Syrian Observatory for Human Rights said 13 people had been killed and another 80 wounded.

Rescuers and medics in Douma say more than 40 people died after an alleged poison gas attack late Saturday in the last rebel-held pocket of the one-time opposition stronghold of Eastern Ghouta, outside Damascus.

Access to the area, which has faced weeks of regime bombardment, is limited and AFP has not independently verified the accounts.

The Organisation for the Prohibition of Chemical Weapons said it was investigating the allegations but that so far only a “preliminary analysis” had taken place.

Since February 18, Syrian regime forces have been carrying out an offensive against Ghouta that has killed more than 1,700 civilians and cornered rebels in their last holdout of Douma.

After capturing most of Ghouta, Syria and Russia secured two negotiated withdrawals last month that saw 46,000 rebels and civilians evacuate.

A group of detainees arrived in Damascus overnight Monday to Tuesday after being freed by Jaish al-Islam, state news agency SANA said.

In a parallel operation, 65 buses carrying fighters and civilians left the outskirts of Ghouta and headed to north Syria, the Syrian Observatory for Human Rights said.