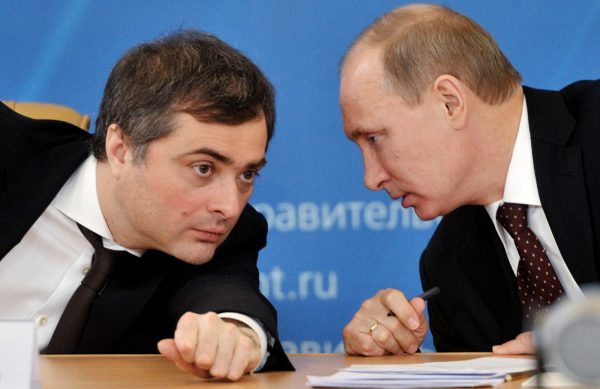 Russia’s Prime Minister Vladimir Putin confers with his aide Vladislav Surkov during a meeting on the modernization of the secondary education in the Urals city of Kurgan, on February 13, 2012.
Share:

Russia has abandoned its centuries-long aspirations of integrating into the West and is bracing for a new era of “geopolitical loneliness,” a top adviser to President Vladimir Putin warned in a magazine article released Monday.

Vladislav Surkov wrote in the piece for Russia in Global Affairs that “Russia’s epic journey toward the West” is over, marking an end to its “repeated vain attempts to become part of Western civilization” over four centuries.

Surkov’s article echoes statements from Putin. The Russian leader sought to forge close ties with the West after his first election in 2000, but later grew increasingly critical of the United States and its NATO allies. He accuses them of shunning Moscow’s offers of cooperation and trying to sideline and weaken his country.

Russia-West ties have sunk to post-Cold War lows over the Ukrainian crisis, the war in Syria and other issues, most recently the poisoning of an ex-spy in Britain that triggered mass expulsions of diplomats.

Surkov, a longtime Putin aide who served as his top strategist for many years and currently works as the presidential adviser on Ukraine, wrote: “Loneliness doesn’t mean complete isolation,” but added that Russia’s openness would be limited.

Russia’s 2014 annexation of Ukraine’s Crimean Peninsula and Moscow’s support for separatists in eastern Ukraine triggered U.S. and European Union sanctions that together with a slump in global oil prices sent the Russian economy into a two-year recession.

A 2015 peace deal brokered by France and Germany helped reduce the scale of the hostilities in eastern Ukraine, but regular clashes have continued.

Surkov, who held several rounds of fruitless talks on the Ukrainian crisis with U.S. counterpart Kurt Volker, said 2014 marked a watershed that in his view launched “a century (or perhaps two or three centuries) of geopolitical loneliness.”

He lamented futile attempts at Westernization by past Russian rulers, noting that Russia has attempted to imitate the Netherlands, France and the United States and “edge into the West” during its history.

“Our elite perceived the ideas and trepidations coming from it with a huge and probably excessive enthusiasm,” Surkov said.

Not any more, he warned.

“Russia without doubt will engage in trade, attract investments, exchange know-how and fight wars … compete and cooperate, cause fear, hatred, curiosity, sympathy and admiration,” Surkov wrote. “But without false goals and self-denial.”

The 53-year-old Surkov, a colorful character who admires American rapper Tupac Shakur and has written novels, ended his piece on a somewhat enigmatic note.

“It’s going to be tough,” he said, adding that Russia will face a long journey “through the thorns to the stars.”