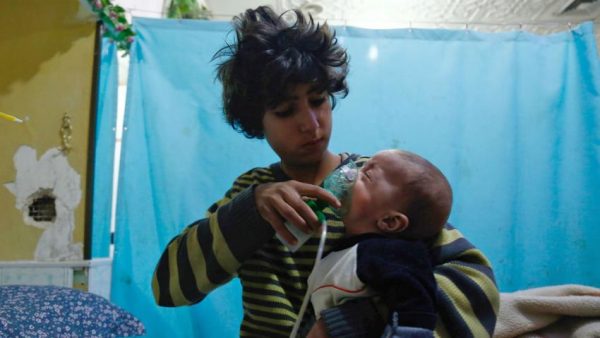 A Syrian rebel group accused government forces on Saturday of launching a deadly chemical attack on civilians in a rebel-held town in eastern Ghouta, and a medical relief organization said 35 people had been killed in chemical attacks on the area.
Share:

A Syrian rebel group accused government forces on Saturday of launching a deadly chemical attack on civilians in a rebel-held town in eastern Ghouta, and a medical relief organization said 35 people had been killed in chemical attacks on the area.

Syrian state media denied government forces had launched any chemical attack and said rebels in the eastern Ghouta town of Douma were in a state of collapse and spreading false news.

The U.S. State Department said it was monitoring the situation and that Russia should be blamed if chemicals were used.

Reuters could not independently verify reports of a chemical attack.

The Syrian government has recaptured nearly all of eastern Ghouta from rebels in an offensive that began in February, leaving just Douma in the hands of an insurgent group, Jaish al-Islam.

The Syrian Observatory for Human Rights said 11 people had died in Douma as a result of suffocation caused by the smoke from conventional weapons being dropped by the government. It said a total of 70 people suffered breathing difficulties.

Rami Abdulrahman, the Observatory director, said he could not confirm if chemical weapons had been used.

Basel Termanini, the U.S.-based vice president of SAMS, told Reuters the total death toll in the chemical attacks was 35. “We are contacting the U.N. and the U.S. government and the European governments,” he said by telephone.

The political official of Jaish al-Islam said the chemical attack had killed 100 people.

A U.S. State Department official in a statement said the Syrian government’s history of using chemical weapons against its own people “was not in dispute”. “Russia ultimately bears responsibility for the brutal targeting of countless Syrians with chemical weapons,” the official said.

In the face of military defeat, rebel groups in other parts of eastern Ghouta opted to accept safe passage out of the area to the opposition-held territory at the Turkish border.

Several thousand people — fighters and civilians — left Douma for northern Syria in recent days as Jaish al-Islam held talks with Russia over Douma. Jaish al-Islam has insisted on remaining in the town.

The group rejects what it calls President Bashar al-Assad’s policy of forcibly transferring his opponents to areas near the Turkish border.

Rebel-held areas of the Ghouta region were hit in a major chemical attack in 2013.

Last year, a joint inquiry by the U.N. and the Organization for the Prohibition of Chemical Weapons (OPCW) found the Syrian government was responsible for an April 4, 2017 attack using the banned nerve agent sarin in the opposition-held town of Khan Sheikhoun, killing dozens of people.

The inquiry had previously found that Syrian government forces were responsible for three chlorine gas attacks in 2014 and 2015 and that Islamic State militants used mustard gas.