‘He had no gun, no molotov’: Gaza families call for investigation into Israeli use of fatal force 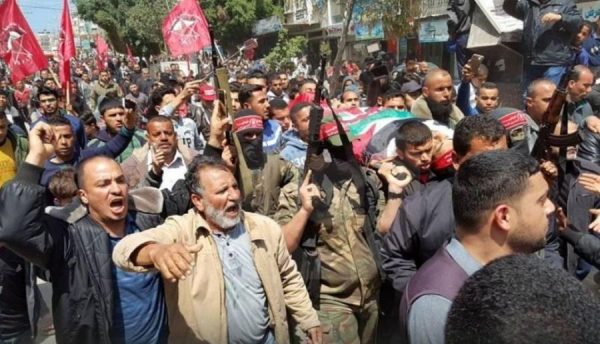 By Loveday Morris and Hazem Balousha

BEIT LAHIA, Gaza — The morning after burying 19-year-old Abdul Fattah Abdul Nabi, his family gathered in a tent set up to receive mourners, watching and re-watching a video of the moment they say Israeli soldiers shot him in the back of the head.
The video appears to show the teenager, dressed in black, running away from Gaza’s border fence with Israel carrying a tire. Just before reaching a crowd, he crumples under gunfire.“He had no gun, no molotov, a tire. Does that harm the Israelis, a tire?” asked his brother Mohamed Abdul Nabi, 22. “He wasn’t going toward the Israeli side. He was running away.”

The teenager was one of at least 15 people killed in the Gaza Strip by Israeli forces on Friday during what Palestinian factions billed as a peaceful “March of Return” to mark Land Day, the anniversary of the expropriation of Arab-owned land by the Israeli government in 1976. But it ended as the bloodiest day in the 140-square-mile territory since the 2014 war between Israel and Hamas, the militant group that controls Gaza.

Israeli Prime Minister Benjamin Netanyahu praised the Israeli military for guarding the country’s borders. “Israel will act firmly and decisively to protect its sovereignty and the security of its citizens,” he said in a statement Saturday.

The Israeli military has warned that it will “expand” its response if violence continues. Hamas and other factions in Gaza have vowed to keep up demonstrations, raising fears of more clashes.

Abdul Fattah’s family is among those demanding an investigation into the Israeli response to the protest, saying videos show he posed no threat. More than 700 people were injured with live ammunition in the demonstration, according to the Palestinian Health Ministry in Gaza. Forty-nine were wounded Saturday, it said.

The United Nations on Saturday said it was “deeply concerned” and called for a transparent, independent investigation. The Israeli human rights group Adalah and the Gaza-based Al Mezan Center for Human Rights wrote to Israeli Attorney General Avichai Mandelblit to demand accountability.

In the letter, they said the use of live fire against civilians was a “blatant violation of international laws.”

Israel said it stuck to strict rules of engagement to deal with a 30,000-strong crowd along the border, saying “rioters” threw molotov cocktails and stones, burned tires, and tried to break through the fence.

The Israeli military did not immediately respond Saturday to requests to clarify the rules of engagement that were followed. In the days preceding the demonstration, the military dropped leaflets warning residents of Gaza to stay at least 300 meters from the border fence or risk being shot.

Israel accused Hamas of using the cover of peaceful demonstrations to carry out attacks. Hamas said five of those killed were members of its military wing, releasing their names and pictures.

Israel put the number of Hamas militants killed at eight, including a 20-year-old with a name similar to Abdul Fattah’s. Israel said two others among the dead also were members of militant groups.

Abdul Fattah’s family said he worked in his brother’s falafel shop during the week and in a kitchen on Fridays. They said he did not belong to an armed faction.

Unlike at funeral tents for dead militants, there were no signs indicating he had an allegiance to any group.

Posters bearing his photo in the funeral tent showed him wearing a black bow tie rather than the military garb typical of fighters. The Israeli military did not respond to a request for comment Saturday to clarify the name discrepancy.

His family, though, made no effort to hide the fact that Abdul Fattah went to demonstrations and threw stones. That was no reason for him to be shot, they said.

“They were throwing stones, but the stones never even reached the fence,” said 28-year-old Alaa Abdul Nabi, another brother of the slain demonstrator. “It’s a message, to throw a stone from our land.”

Many demonstrators said they were there to protest peacefully. The family of 20-year-old Badr Sabbagh said he had just arrived to watch the demonstrations when he was shot. They rejected the Israeli army’s assertion that everyone killed was involved in violence.

“He asked for a cigarette, I gave it to him, he had two puffs, and then he was shot in the head,” said Mohammed Sabbagh, his 29-year-old brother. “He’d only been there 10 minutes.”

“I took my grandchildren. We went to a peaceful demonstration,” said his father, Fayik Sabbagh, 64. “We went there to tell them this is our land, but what we found was different.”

The demonstrations, which Hamas and other Palestinian factions hope to sustain for another month and a half, had subsided Saturday, with thinner crowds at the border than a day earlier.

Israel will target militants in Gaza if violence along the territory’s border with Israel drags on, the chief military spokesman warned, a day after 16 Palestinians were killed by Israeli fire.
In response to the video of Abdul Fattah’s killing, the Israeli military warned that Hamas had published several videos of Friday’s events, “some of which only depict parts of incidents while others are edited or completely fabricated.”

Two other videos circulated online showed the shooting from different angles, while witnesses said Abdul Fattah was clearly running away from the fence.

Palestinian photographer Mahmoud Abu Salama was taking pictures at the time and captured Abdul Fattah’s last moments. He said a man seen wearing a green shirt in the video had run toward the border fence to retrieve a tire left there earlier in the morning. He is seen in the video crawling on his belly toward the tire, then picking it up and running back to the crowd as bullets kick up dust around his feet. As he stumbles, Abdul Fattah runs to help him and grabs the tire.

Abdul Fattah was shot from behind a few hundred meters away from the fence, Salama said.

“He was killed in cold blood,” Alaa said. “We will report that to the United Nations. We want to know who participated in killing him. He wasn’t armed.”

But he had little hope that anyone would be held accountable, a sentiment echoed by the Israeli human rights group B’Tselem.

“These are the predictable outcomes of a manifestly illegal command: Israeli soldiers shooting live ammunition at unarmed Palestinian protesters,” said Amit Gilutz, a spokesman for the group. “What is predictable, too, is that no one — from the snipers on the ground to top officials whose policies have turned Gaza into a giant prison — is likely to be ever held accountable.”

Abdul Fattah, like the majority of Gazans of his generation, had never left the Gaza Strip. Israel has imposed tight restrictions on the movement of goods and people since Hamas took control of the enclave in 2007.

Over the past year, though, the United Nations has warned that the humanitarian situation in Gaza is rapidly deteriorating, adding that the economy and services may collapse. The unemployment rate is estimated to be about 50 percent.

Israel blames Hamas for the worsening humanitarian situation, saying the group diverts money it should use for the benefit of its civilians to nefarious military activities.